Yeah I’m still not quite sure what’s going on with these particular items… e.g. that green weapon you put a few posts above, your character is level 55 and the game data indicates that you were level 55 when the item dropped, and it’s using a scaling curve that indicates player level 55 should map to item level 95… yet it is once again using a higher item level that would map to a player/drop level of anywhere from 56 to 58.

I did an update with a guess at how blizzard might be handling these items – you would need to re-import your character for the change to take effect.

Update:
I don’t think this is working; this side of knowing what the data that AMR uses over & above the item no., for an identifier, the optimiser has lost (nearly) all ability to differentiate between multiples of exactly the same item.
Something I did notice in the AMR metadata is this data string, at the bottom of the tooltip:
177808, x, Bonus ID: 40… where x seems to vary (in the case of my Demon Hunter, I see 63, 85 & 86) for some reason. 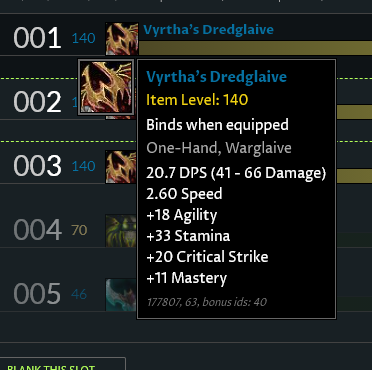 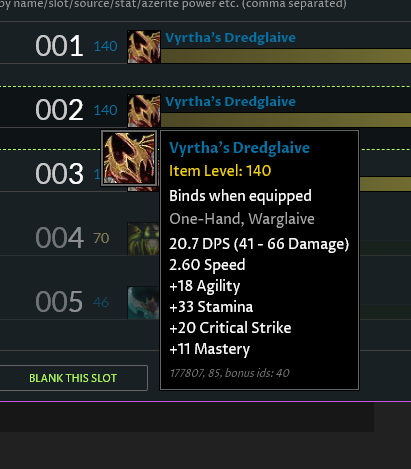 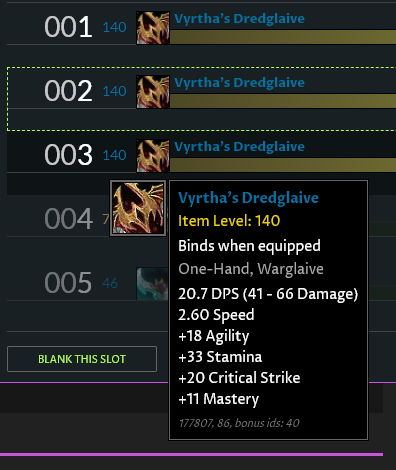 While a flat iL would seem to be part of the problem, the only other identifier that seems to matter (at least for Vyrthra’s Dredglaive) would seem to be the CLASS level it was looted at, irrespective of the character that looted it - however that gets noted.

As far as BoE greens go, they seem to be a separate issue with scaling iL in the same way that rewards from Zone Bonuses have… maybe how those rewards scale may be a key to BoE iL scaling.

That other number is our internal unique ID to differentiate between different instances of the same item in your bag. When possible, we map that back to a GUID found directly in-game on each item.

What specifically is not working for you? What should it be showing for these items that it is not?