[Tanking] Item of higher item level is a downgrade

So I’m trying to see in mr robot which heroic dungeon would give me the best upgrade for my tanking gear, and I’m thinking that it must be legs, as they are low itemlevel of 158, but the upgrade finder only suggests weapons as upgrades, strangely. So I look specifically for legs, and see that the exact same legs that I have, but the heroic version, which of course has the same stats, only more of it, is actually a 13% downgrade, which I’d argue it’s not.

Now, me and mr robot has had our problems previously, so I gather that it’s probably because I have too low itemlevel, and keeps dying in the simulation, meaning no gear actually makes me survive. This is a problem I know you’re aware of, but I’d argue that using mr robot to try to figure out how to survive mythic when I have an itemlevel of 170 doesn’t feel like outside the scope? I haven’t actually done any mythics in shadowlands, but if the simulation says I’ll be steamrolled in mythic+2, maybe we need a mythic “+0” simulation? I know that I can select “full toughness” to make sure to give myself the best odds, but even with that, the legs are still a downgrade somehow.

However, that’s not all that’s at fault here I imagine, because the extra agility and secondary stats of a better itemlevel should surely still be a DPS upgrade in the seconds before i die? And selecting “all dps” will actually show those legs as an upgrade, if only slight.

I’m not sure what’s going on with those rankings… move the toughness slider one tick off of all toughness and then the suggestions look good. We’ll look into what is going on in this case with all toughness.

I’m not sure if I’m doing something wrong? I’ve obviously actually done BiB before trying to find upgrades. Also did page reloads to make sure the configuration stuck. 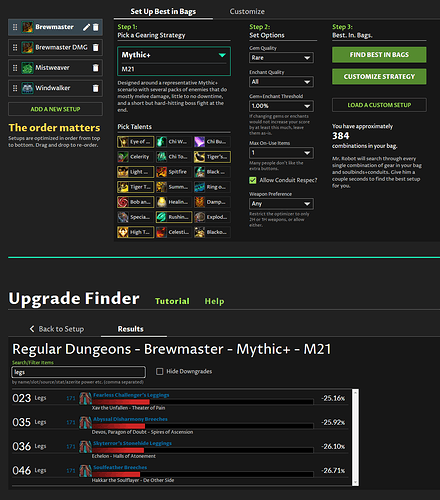 We’re looking at it to see what’s up

We’ll have a fix for this in the next update – it is an issue having to do with the complications that arise for classes that can use different weapon setups (2-hander vs dual-wield).

Until we post a fix (in the next day or two), you can avoid the issue by ensuring that your currently equipped gear and the Best in Bags solution for your setup have the same type of weapons equipped (e.g. you and your solution are using a 2-hander, or dual-wielding), then run the Upgrade Finder again.