Hey. So, the Legendaries Upgrade Finder of AMR is not considering putting Primordial Arcanic Pulsar on shoulder pads at all for some reason 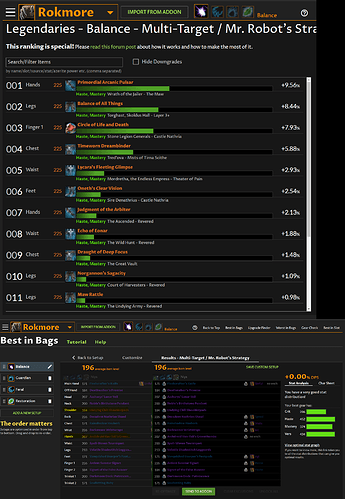 And given the state of my current gear, particularly my current shoulder pads and gauntlets, I’m finding it very difficult to believe that this isn’t some sort of bug.

I know that AMR’s Legendaries Upgrade Finder tries to show what’s best in the long-term but the legendary shoulder pads with that memory aren’t even showing down in the list with a negative percentage or anything!

And by the way, I believe that I observed a similar situation with another alt of mine, where the Legendaries Upgrade Finder simply completely ignores the second slot that a top runecarver memory can go in.

Can someone, please, explain why this is the case or at least confirm that this is some sort of bug?

P.S. This post was hidden by community flags? For the image links perhaps. At the same time, “new users cannot embed more than one” piece of media. Well, how am I going to show you what I’m referring to?

This is quite annoying to be honest. Either make the “community flags” identify “advertisements” more accurately, or allow us to attach at least a couple of partial screenshots to show what we’re talking about. This time, I just happened to be able to use Photoshop and have access to it to combine both screenshots into a bigger image; others may not be so lucky.

This search shows you, in the long run, which power is best and which item it will be best to have it on. It does not show the same power on a second or third item slot - it will always plan ahead and pick the one that is best in a BiS situation.

The purpose is to plan ahead, for when you get all the gear you want. If you decide to put it on a different slot instead, BiB will optimize around that for you.

I know that AMR’s Legendaries Upgrade Finder tries to show what’s best in the long-term but the legendary shoulder pads with that memory aren’t even showing down in the list with a negative percentage or anything!

And by the way, I believe that I observed a similar situation with another alt of mine, where the Legendaries Upgrade Finder simply completely ignores the second slot that a top runecarver memory can go in.

My take is that the Legendary Upgrader looks at the Memory first, then the best slot option for your character, based on your existing gear.
To see what Slot upgrades any given Memory would give would be where Add to Bags comes in.

For Primordial Arcanic Pulsar, Add to Bags allows you to add both a Shoulder & Glove variant of the Memory - at the same or even different iL('s) - to see which of the two would be the better upgrade.

Thank you for pointing out the Add to Bags feature. I forgot where it is and have never used it before, even though I was aware of it in the back of my mind.

Would you agree that these results make things even more confusing now?

As you can see, the shoulders are actually better, at least according to the “Add to Bags” feature; they’re better at iLvl 190 and better at iLvl 235 too. 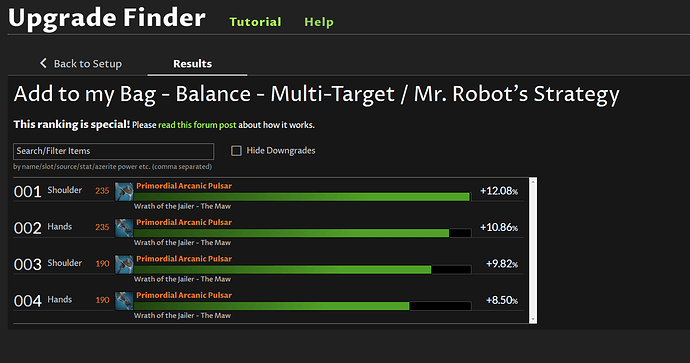 Wait, I think I see now what’s going on, after using the Best in Slot feature.

Apparently, the BiS gauntlets are iLvl 226, which I found by locking the legendary shoulders in the BiS feature:

Whereas, if I allow the gauntlets to be the legendary, they can go all the way iLvl 235, of course, and there are BiS epic shoulders that are iLvl 233:

It’s a 0.38% difference in DPS but the iLvl difference is significant in my opinion. I’m just surprised that the average iLvl stays at 229 in both cases, though. I just calculated this to understand what’s happening, and realized that AMR rounds down from X.6 for some reason.

The more accurate average iLvl with the legendary shoulders is 229.19, which makes sense to round down to 229, but the average iLvl with the legendary gauntlets goes up to 229.63, and it would make more sense to round that up to 230. At least that’s what I learned in school, that we round up from X.5 or higher. And even if there’s some difference in treatment for X.5, where some schools round it up and others round it down, I haven’t heard of any difference of opinion on X.6 and higher; this is always rounded up, not down.

The shoulders might be better for you right now, with the gear you have. The legendary search is considering a BiS situation so that you can plan ahead. Using the add to bag works well for what you are looking to do, that was a good suggestion eighjan had.

I don’t know about the item level calculation - yellowfive is the one who figured that all out and implemented it under the hood. It doesn’t affect the optimization at all.

Firstly, average item level doesn’t actually impact anything as far as damage calculations, etc. It’s just for display, and the game sometimes uses it for LFR requirements and stuff.

As far as I know, the game truncates the decimal when displaying your average item level, so we do the same. Blizzard is very inconsistent about how they display rounded numbers. Whether they actually consider your ilvl to be 229.63 or 229 behind the scenes… I don’t know, but it doesn’t really matter.

Hey. Apologies about being so late in replying. I just wanted to thank you for clarifying that the reason for the rounding down of the average iLvl is that this is how Blizzard does it — I didn’t know that, and also make a suggestion that may potentially be a good improvement for AMR’s website.

And yes, I understand that the shown average iLvl makes no difference at all in the calculations. The reason I cared about the accuracy of the average iLvl is that humans subjectively care about it. Personally, from my perspective in this case as a user, it would feel just a little better to see that AMR did indeed plan ahead well enough to prepare my character for a very slightly higher average iLvl by using that specific legendary now. You see what I mean here?

Also, if Blizzard rounded up, properly I like to think, instead of truncating decimals, then that would also look better to other players when considering your character for an M+ PuG or so. I know that 1 iLvl up is almost nothing from a theorycrafting, objective perspective, believe me, but I also know enough psychology to realize that an average iLvl of, say, 220 looks better to the owner of the gear and others, emotionally and subjectively, than 219. I don’t know if you’d agree with me on this but that’s what I know about human psychology, at least most humans. Yes, there will be a few people here and there who will be able to judge more objectively but, from my experience, those are exceptions.

And don’t get me wrong, I’m not trying here to suggest that you ignore Blizzard’s way of doing things, as this may be more confusing than helpful. People will probably come here and ask why AMR is showing a different iLvl from the one they see in-game. However, maybe AMR can show between parentheses the more accurate average iLvl, like so: 229 (229.63).

Such a solution will show AMR customers the exact changes in iLvl, up to two decimal points, while still sticking to Blizzard’s way of doing things and truncating when showing the official or in-game average iLvl.

You can also perhaps use that dotted underline CSS syntax on the website, or something like that, at least under one of the shown instances of the average iLvl to allow the website users to mouse over the average iLvl to see a pop-up tooltip that says that the approximate average iLvl is truncated, instead of being rounded up, because that’s how Blizzard does it and shows it in-game.

And thanks again for explaining things about this issue to me, everyone. I appreciate it.