AMR recommends the “Darkmoon Deckbox:Watcher” as my best in slot trinket for both raid and mythic+. I don’t see this trinket recommended or mentioned anywhere in the “pro” player guides, none of the top parsing players run it, and haven’t seen a single player in my dungeons with it. I’ve been using it to experiment with and I actually love it. It lets me soak unavoidable damage, gives survivavility in tough spots, and triples my versatility for 12 secs guaranteed with the jet sigil modification. I’m wondering how AMR sims this so high. Does it pop it on cooldown and assume you are always drawing the ace for 12 sec durations? Or does it pop it right before big ramp endings like convoke/flourish combo? Also does the sim assume the jet sigil modification? I don’t see how any of the other sigils could be viable, this reliably gets me the ace 90% of the time. So I can do the same, I want to learn how AMR uses the trinket and why it values it so highly. 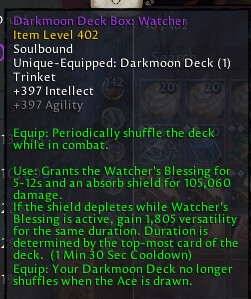 I also saw that it value this trinket super highly: 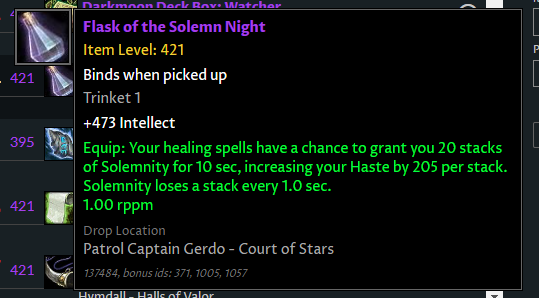 Are trinkets not subject to diminishing returns on a stat? This would put me way over the haste cap on a 420 iLV sample build. Does anyone know what is taken into account for the cap on diminishing returns? Is it food, flasks, gems, enchantments as well? I’ve heard talents and percentage based buffs like lust do not suffer diminishing returns, and so I’m wondering if there is concrete info on this. The sample 420iLV BiS build I made, gets about 4.1k haste “from gear” (the cap for haste is 5.1k). 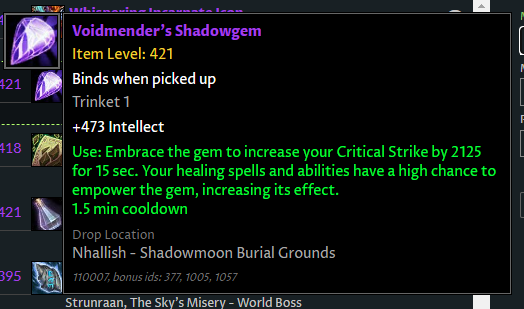 Is there anyway to figure out how AMR is using it? I’m assuming it pops the active right before the big convoke/flourish combo after the ramp setup.

Thanks for your time.

There isn’t really a “cap” for secondary stats and DR, it is a very gradual curve.

DR on secondary stats only applies to stats gained via rating, so something like Bloodlust wouldn’t impact it. You can have a lot of haste before it really becomes much of an issue. For example if you have 40% haste from rating on gear, it only diminishes to 39%. At 50%, it only diminishes to 47%. So we’re not talking a huge drop-off here at obtainable levels. (40% would be 6800 rating, 50% would be 8500).

A lot of theorycrafters like to treat the point at which DR starts (30% from rating) as OMG HARD CUTOFF, any more than this and you are SCREWED! But as you can see, you can go all the way to 40% with minimal impact – if haste is a good/favored stat for you, it won’t even move the needle on gear decisions in most cases. Once you go to 50%… yeah maybe that will make a difference in some cases.

Of more interest is when you have that much haste combined with big haste effects like Bloodlust, you can reach the min GCD for some specs – then you certainly start to lose some value.

We still have a bunch of adjustments for trinket effects we plan to make in another pass at some point – the estimates right now are good and are working similarly to how we did it in Shadowlands. I have plans to beef them up for Dragonflight and forward though – our new ranking system gives me a lot more flexibility to improve them further. We’re not talking huge differences, but I hope to pick up some of the smaller nuances of combining certain trinkets that have always been hard to rank, etc.

Our estimate for watcher is pretty simple right now, we are not trying to be clever and maximize its use at all, basically popping it on cooldown. We also low-ball the versatility estimate for non-tanks, assuming you’ll only get it 1 in 10 times you use the trinket. We’ll probably expose a setting for this at some point since it is very hard to predict for non-tanks.

I also do not have any adjustments for the darkmoon card embellishments, it is using an average, unmodified value… so the estimate is probably a bit low if you have the Ace mod.

Or put another way… no idea why people would rank this trinket low. Even being super conservative, it seems good.

Tyvm for this detailed response!

Good to know the estimates are actually conservative

That’s so crazy considering, like I said, I get the full duration (ace) about 90% of the time. Makes sense though, with a couple of full duration Watcher procs, I hit aboout 125k hps in the Lorewalker Stepstone fight in Temple - not to mention it gave me way more survivability as well.

Also, awesome to hear haste is good for a while, as I love the feel of high haste for chaining roation and channeled spells. It feels like I can be higher apm; almost like I have more control of my char and the limit is only myself, the pilot.

Thanks a lot for your time.

I’ve been using it as a resto druid and I really like it, have been able to reach 80-90 parse with it. I think it’s a great accessibility trinket for healers that have difficulty dodging stuff, like me who has fps issues as well as cognitive issues. I keybound the trinket to an easy to remember spot and built the muscle memory to press it as soon as I realize I’m standing somewhere I shouldn’t. It’s a win-win to get hit because now you have a giant versatility buff to save your team from whatever distracted you in the first place.