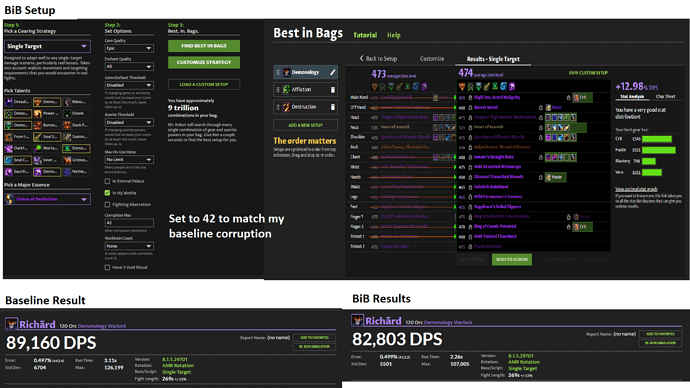 Heyo =D
Can you link both simulation you did ? Or at least the 89k one.
I dont seems to find anything that usally can cause this (custom rules or talent changes etc…)
Personnaly simming the BiB i have 88k alsmost 89k.
https://www.askmrrobot.com/wow/simulator/report/146a2f7cdc4f4adda4eba604bc70ad6f
So pretty close to your “baseline result”.
It could be from few different specially if warlock demonology have lots of variation (wich seems the case du to the “max obtain” in the sim)

According to your image, it looks like you’re using a really old version of AMR (Patch 8.1.5) when simulating as seen on the “Version” info below your dps numbers. Not sure if that’s only a caching / display issue as those results do seem quite reasonable.

Generally speaking that does indeed look quite wrong and I’d suspect its another example of “problems with stupidly high secondary stats due to purchasable corruption”.

AMR uses a large amount of data to be able to present its information within a couple seconds without having to run thousands of simulations every time. To achieve that, the AMR team had to make several assumptions when building that data - e.g. how much secondary stats any character might have. With buyable corruptions and stacking of passive bonuses it’s apparently really easy to fall outside of those assumptions after which the optimizer may get confused.

Personally I haven’t seen anyone mention differences that obvious or egregious though, probably because you’re having a lot of alternatives for every slot. AMR might probably need some new data then, especially as those issues seem to become more and more common. As far as I know they’re already aware of the issue though.

Personnaly simming the BiB i have 88k alsmost 89k.
https://www.askmrrobot.com/wow/simulator/report/146a2f7cdc4f4adda4eba604bc70ad6f

That’s probably because your simulation does not use BiB according to the posted snapshot but rather the currently equipped gear.

Interesting catch on the version, not sure why it displays like that but it’s not something that I have tweaked in any way but i ran them again today with similar results.

These ones reflect the most recent patch.

The major noticeable thing I see is that it doesn’t seem to be valuing haste sufficiently and seems to recommend more balanced stats. Perhaps its not effectively accounting for the amount of expedient I have stacked in determining the value of haste relative to its normal values or relative to the other stats.

The only other thing I can think of is the BiB function isn’t getting the same results from simming my current gear as the simulate function is.

BiB does claim its a 12% upgrade so perhaps it simmed the equipped gear, got a worse result than my sims and determined the best it can get is what it’s showing. Not sure how I could inspect or confirm that but that could be the root of the issue.

This is going to be a really hard case for the optimizer to handle on its own… Stacking the %stat corruptions in general has been hard to deal with. We’d have to run a ton of extra data to deal with them. And then in this case they can combine with Explosive Potential… which is normally not going to be an optimal choice. So, really we need to give the optimizer some hints to help out here by telling it that Expedient is worth more and also that we want 3x Baleful and 3x Explosive.

The gear systems in BfA have gotten so crazy at the end here… I wish the optimizer could handle every case, but unfortunately some manual tweaking is necessary.

It kinda seems like running the simulate function is returning reasonable results but the BiB result from the currently equipped gear doesn’t seem like it’s getting the appropriate calculations.

I can demonstrate this with my destruction setup as well. 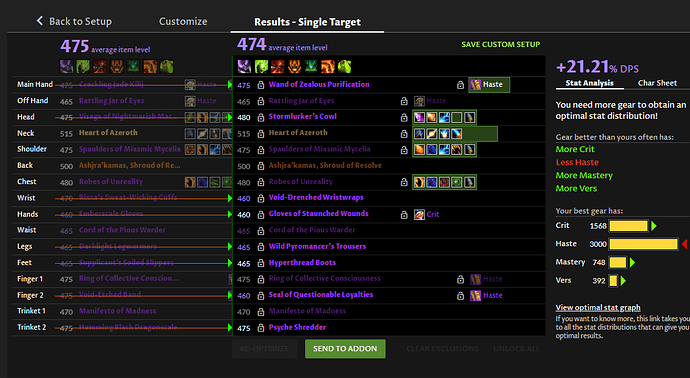 Yeah, we’ll see if we can make some tweaks. At this point we really have to weigh our time spent since we are into 100% shadowlands development. Should we spend a bunch of time making this optimization work in BfA… at the expense of time spend on shadowlands… or can we get away with using the customize tools until shadowlands comes out?

And then the pre-patch… ug, who knows wtf we’re going to do for that. I hate pre-patches.

haha the pre-patch is definitely gonna be a whole thing >.<

There was an issue where the label on the version got overwritten to 8.1.5, but it was actually still running the live and latest 8.3 version. I think I have that display issue fixed now – it was just the label and did not impact the simulator or optimizer. (A way to verify that when it said “8.1.5” it was actually running a later version is that… things like corruption actually worked, which weren’t added until after 8.1.5!)

Having the optimizer follow the simulator is really a function of the underlying data. Based on how crazy BfA gear became, we are working on strategies to extend the optimizer across a larger range of potential builds without making it take impossibly long to calculate the data we need.

The problem really at this point is that there is too wide a range of potential stats and we need a ridiculous amount of data… we need to get even more clever with our data generation.

@yellowfive: That’s what I expected seeing those dps numbers but I thought I’d mention it regardless - and at first glance I wanted to say something about doing ~90k dps without corruption and essences.

@Swol: So I’d guess just having the Global Network run for a bit would not be enough to get at least somewhat improved results?

It’s hard to just tack data on to the existing strategies… would have to recalculate the data and spend a bunch of time on specific synergy between certain effects. That’s really where the issues arise - just getting a wider range of data for stats isn’t a big problem… it’s this synergy across the traits and corruptions that makes it a beast.

Certainly doable… but we think spending time on shadowlands instead is ultimately going to make people happier.

Ah, that does indeed sound much more problematic than just “adding more dataz”… I suspect there’s absolutely no way to help out there?

I’d totally agree that spending more time on Shadowlands would be the right call though - especially that late in an expansion. I’ll definitely continue to explain the situation and recommend some manual tweaking, especially over on the official forums where we’ve recently had some similar complaints.

Cool, thanks - yeah this is really a symptom of a bit of an issue with our system for finding the best gear. We are working on ways to get rid of this issue going forward so when we get to the end of shadowlands it doesn’t crop up again. Playing wack-a-mole with specific builds in the optimizer isn’t very efficient.

As you’ve seen - we are aware of the optimizer diverging from the simulator in a few cases. We’re not ignoring it, but we’re mainly putting out effort into making sure it doesn’t happen moving forward instead of patching the BfA stuff. Most people at this point in BfA are more in the boat: I know the build I want to use already - so the customization features end up being a decent band-aid to get us to shadowlands.