To make a snapshot, press the “help” link next to the big Best in Bags section header, then follow the instructions to post the snapshot ID here.

I do have 2 legendaries in that slot, the resto and the elemental one, maybe that’s the issue? I just can’t lock them in place.

Thanks, I have an update going out tonight that should resolve the issue. You may need to unlock/re-lock your items after the update.

Very much appreciated. Of course you are enabling my laziness… Which I appreciate

We just posted an update that should resolve this and other issues that people have found today. We appreciate the reports, and keep them coming if you notice anything! Patches are always fun!

Lock in an item is working now. Thank you for your awesome work.

Just another little thing i’ve noticed is that the following 3 options are switching back to the default state every time i’m switching setups. 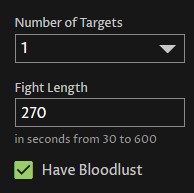 I’ll take a look… those should be saved with each setup.

Just to verify for you this is working properly now. (the locking issue)

I found the issue, we’ll fix it in the next site update.

In addition to frequent bug fixes during the pre-patch, we will also be updating the scoring and rankings for specs incrementally. Don’t be surprised if you notice the rankings changing pretty frequently over the next couple of weeks.

We’re taking a successive refinement approach, so each spec will go through probably two revisions before the Dragonflight release, and then one more tuning pass shortly afterwards.

After that, the scoring should be pretty stable – it will only change if something in the game itself changes, or a new trend becomes really popular that we make available as a new strategy, etc.

any progress with talent switching via the addon yet?

We’re working on the optimization models first – I probably won’t get to that until closer to the Dragonflight release. We’ll do that along with some other talent-related features.

For now I recommend creating a saved talent build in-game to go with your setups, then swap to that when you load a setup.

Heya, thanks for all the hard work.

I noticed that I can’t find the portion of the site that used to display rotations. Was that removed at some point? Will it be back? Am I just looking in all the wrong places?

We are working on new stuff for Dragonflight – with the new talents and all we have to rework some things. Once we have the optimizer fully functioning and updated we’ll turn to getting other features up and going.

We have been working on updating rankings for specs one at a time over the past couple weeks, and hope to have all talents for all specs fully implemented by Dragonflight release.

Then we will of course have to do some testing and tuning as we see how things play out in the first couple of weeks, so be ready for strategies to change a bit! As with all expansions, things can be a bit tumultuous at the beginning. Some of the balancing patches have been significant by Blizzard as well.

There are about two weeks until Dragonflight drops. Sometime between now and Dragonflight we will do an update that moves further away from Shadowlands and pre-patch code and closer to Dragonflight code.

When we do this update, gem and enchant lists will switch over to Dragonflight data. We will also stop ranking all pre-Dragonflight trinket special effects. We will make another post when that change goes into effect.

We know that this will be a slight inconvenience for a week or so leading up to Dragonflight, and sometimes during leveling it can be a bit of a pain for the first couple of levels until you get higher item level replacement trinkets. Unfortunately it is necessary though… there are thousands of trinkets, and it simply is not feasible to maintain rankings for all low-level items and current content items.

We usually do these updates a little before release to get the new systems and ranking code a workout before the actual expansion.

We know that a lot of people like Pawn strings! We will continue to fully support them (and also bring them to WotLK!). There may be a short transition period around the Dragonflight release where they are unavailable though – don’t worry, they will be back soon!

After we have the core rankings working well just after Dragonflight is released, stay tuned for new features such as expanded customization options, talent-related features, and more!

Any reason why you disabled the sim and the wiki? I understand that your models are not updated but why prevent people who wish to use your tool to theorycraft from creating their own scripts/models?

Do you have any estimated time when the simulator will work again?
With the new talent system there are so many things to try.