Hey all, i dont understand why the addon is picking the way it does.
For full BIS fury warrior in nax.
Why is an orc using axe+dagger with edgemasters when he could be using 2x swords and gloves of annihilation? the swords have higher dps thus generating more fury, they have +6weapon skill making the gloves of annihilation usable. The stat loss from the weapons the gloves of annihilator makes up for. So you are left with much more dps with the swords right?. Also why does the addon not include thunderfury?. Also when going half way on the slider, picking sorta tough, it picks the two swords, but places the slower one in the OH and faster one in MH, wouldnt that gimp your WW insanly? i am just super confused at the choices presented tbh.

I was playing around with it some more, fight duration and buffs etc. I saw that if the addon went over 40%critt then it suggested edgemasters. So if i remove buffs and make sure i do not go over 40/41% critt, the result is this. So the reason is the critt capp or something like that? is the addon valueing the glancing blow dmg reduction above critt when you reach a certain threshhold? 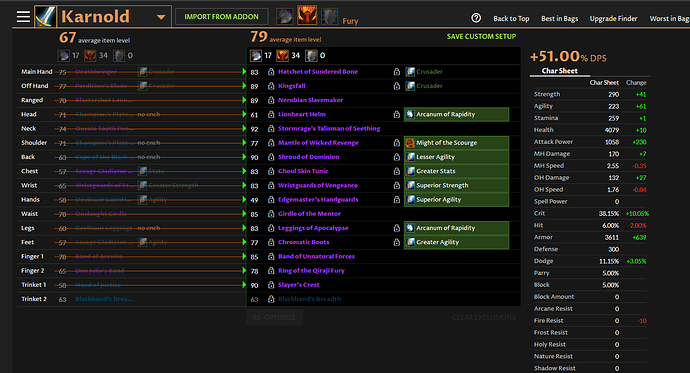 The difference between the above pic and this one, is i removed the moongose elixir from this one, now it is suggesting gauntlets of annihilation, so it seems that above 40% critt the addon is considering other things more highly. Still kinda odd, i thought critt capp was in the 60’s for yellow dmg and 30%+hit for white dmg, so since i have 7%hit it would mean 37%cap, so then it makes sense to take edgemasters to lower glancing blow dmg reduction…am i understanding this correctly? 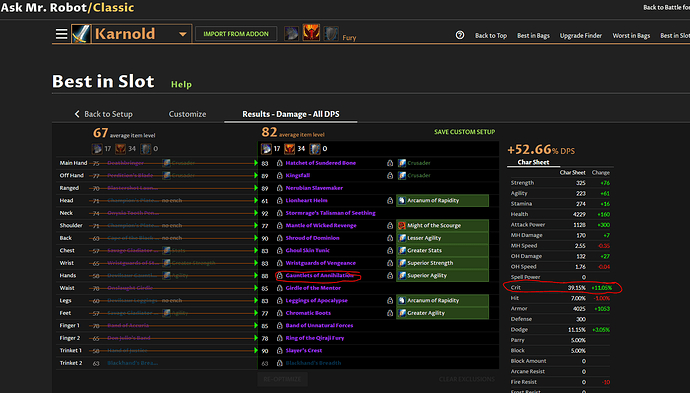 I can take a look and try to figure out why the calculations come out how they are. I’ve been over the warrior stuff a lot, so I feel pretty good about the calculations. As you found out, the length of fight and buffs you are using can significantly affect how you gear.

We’re doing everything based on single target damage, so whirlwind damage isn’t going to factor in very strongly - at least not enough to warrant putting a slower weapon in the main hand. Faster weapons, by any calculation I can come up with, just give more DPS for fury warriors who are using bloodthirst, even factoring in all the weird stuff going on like heroic strike queuing.

The crit cap would be 60%, so I don’t think there’s anything going on here with a crit cap. As you get a lot more crits, it does change the calculations, though, especially if you are optimizing assuming you use recklessness.

One of the unintended consequences of using an optimizer like ours is that you don’t get a nice consistent BiS set unless you always use the same settings. It shifts around with the settings - which is good, because it’s fun to know how the settings change things… but it’s also bad because people don’t expect it and are afraid it could be wrong.

so by placing the slower weapon as a MH, you will generate more rage by hitting more often? and by getting more rage you can BT more often i reckon. Also would keep flurry up constantly. Since BT is based on AP the weapon dmg doesnt matter but speed does?. In naxx you will basicly be constantly using HS aswell, a slower MH would benefit more there i suppose? But ye i just got confused since most of the community accepts that Slow MH and fast OH for rage generation. Even some guides do tell you do use WW on single target. Rotation is usually BT–WW and HS to dump, so it is interesting to exclude WW.
Ty for the answer though, it clarified things a bit. the only reason i see why the addon is picking Edgemasters over annihilation would be to get the dagger above 305 and reduce glancing blow though, so since both the swords have highers base dmg and add sword skill i would think the swords+annihilation would be end game BIS. And again it seems to be related to the critt capp or something like that.

As another note,
What abilities are considered in the calculations?
BT, HS and OP? Would it be possible to get a checkbox or something to add WW into the rotation as well?

If there is rage left over, it uses ww. All my tests show using rage on ww for single target reduces dps.

Having a slow weapon in the main hand isn’t necessarily better for heroic strike damage. Each heroic strike does more damage, but the rage you give up in addition to the rage cost is higher.

If you have so much rage that you can replace almost every main hand auto with heroic strike, a slow weapon makes sense. You have to be taking damage for that to happen. Right now I’m not assuming the rage you get from taking damage, I’m optimizing based on the rage you can generate.

Bloodthirst, execute, and auto attacks make up so much of your damage that the actual weapon speed becomes a relatively minor point in the optimization.