Using default settings except for changing “Release Phase” to “Phase 3 (Hyjal/BT)” and running the TBC Best in Slot calculator advises me to mix gems in a way that makes no sense, particular in socketing pure intellect gems and intellect/mp5 gems, and advises using the “Resilience of the Scourge” (31 healing/11 damage, +5 mp5) shoulder enchant.

This is, of course, nonsense, and I’m unclear on why it’s doing this.

The optimizer is finding that you are mana-limited. In this case, getting some more mana will result in higher damage. Make sure to optimize for the actual fight length and buffs/consumables you will be using.

Also keep in mind that we assume you are fighting for the entire length of the fight, with no downtime. So sometimes optimizing for a shorter fight than you will actually be doing can make sense.

Also, once your item level goes up, the relative value of being able to cast an extra spell increases compared to the value of a little bit of spell power.

The optimizer is finding that you are mana-limited. In this case, getting some more mana will result in higher damage. Make sure to optimize for the actual fight length and buffs/consumables you will be using.

That’s definitely not the explanation. Regardless of what I changed (VT, mana potions, demonic runes, fight length, whatever) it would always end up giving me those results. And now it’s not doing it, even loading the snapshot ID above.

Something is frankly broken in the simulator, as it is now telling me to use healing gems and other wacky things at random.

Starting from this snapshot caddb562931a41c6bc94a6d39e6f61fb, select the bracers (Cuffs of Devastation) and lock them in place. Re-optimizing while selecting the piece of gear the optimizer has selected should obviously result in no changes.

Instead, it tells me to use the T5 set, which is bad enough, because that’s completely bonkers, and even the simulator seems to know it (results are, allegedly, 7.6% in T6-4 and 7.45% T5-4) but then it gets worse by telling me to use Luminous Noble Topaz gems. Manually changing that gem to a Potent Noble Topaz results in a calculated DPS increase of 7.48% (0.03% higher than using the healer gem). And if the 4 intellect on that gem was what the simulator thought I needed, why doesn’t it swap out another gem to get it when I lock this gem in place?

Or, for another example, change the cloak to the DPS cloak (Cloak of the Illidari Council) instead of the healer cloak it selects. Again, it tries to use T5-4pc. So manually set the T6 shoulders, gloves, or legs and re-optimize. It will choose a T6-4 set that includes the helm. Select the T6 robes, instead and it will correctly choose Cowl of the Illidari High Lord as your off-piece. In any of the other three circumstances, manually selecting the correct head piece results in a DPS increase according to the simulator. This is exactly the kind of decision I expect this tool to make for me, and frankly, it’s failing miserably at it.

None of this makes any sense.

When you lock things in, you change the starting point of the optimization. This can result in slightly different results.

Also, the optimizer does not guarantee that it will find the one and only top scoring solution out of the trillions, quadrillions of available gear setups available. It will find one within an extremely small margin of error, though. All of these changes you are talking about are well within a reasonable margin of error. We trade a little bit of accuracy for speed. You will not be able to feel the difference in-game.

That is the other thing that is so crazy about wow classic/tbc gear design: the differences in damage between different gear choices are TINY. So small you could not ever feel it or empirically prove one way or the other if it’s “better” or not. We use a mathematical model to make choices - just so we CAN make a choice, since there is no way for you as a player to do it with any confidence.

Certain types of constraints increase the margin of error on the optimization a little bit more than others. If we ever find anything that is far enough out of wack that people could feel it in-game, we start messing with the optimizer code. In this case, keeping everything unlocked gets the best results, so I don’t think there’s a whole lot to be done.

I’m sorry, but there’s NO WAY this is correct. It seems to be modelling a set bonus for a spell that the spec doesn’t use.

I can’t respond to this without a snapshot.

No snapshot is necessary to understand that your simulator is claiming T5 gloves are 4.5% better than gloves with higher stats on them, stat for stat.

Just go look at the default selections for a frost mage and lock everything in except any two tier slots.

2pc T5 is 100% worthless to a frost mage, but your simulator thinks is a 4-5% DPS upgrade over anything else. Lock out all four of the other tier slots, though, and the problem goes away. 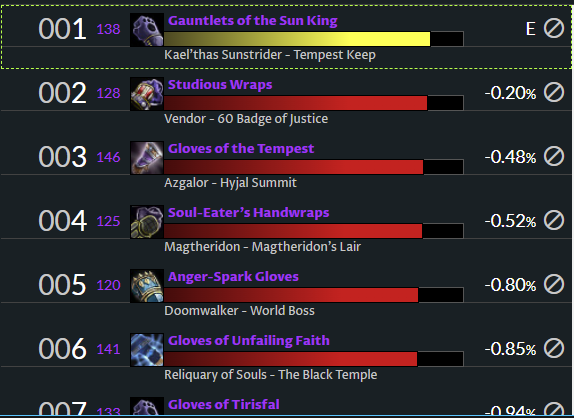 The two piece bonus is being given no value in the optimizer, only the 4 piece. I have a pretty optimistic estimate for the 4 piece, I can try using a different formula for it so it isn’t so aggressively optimistic.

The difference in value between 4pc tirisfal vs tempest is very small - the 4pc tirisfal is a significantly better set bonus.

Sorry, but I just don’t believe you.

Unless you forbid the optimizer from using 4 of the 5 available pieces of T5, it goes for T5-2pc EVERY SINGLE TIME.

Not 4pc. 2pc. And it shows the item as being a 4-5% upgrade over items which are obviously much better, until you remove the 2pc bonus.

If it’s not because you’ve incorrectly modeled the 2pc bonus, then it’s some other bug.

Initial results. Default settings for your Frost mage template (except changing the phase to Sunwell). 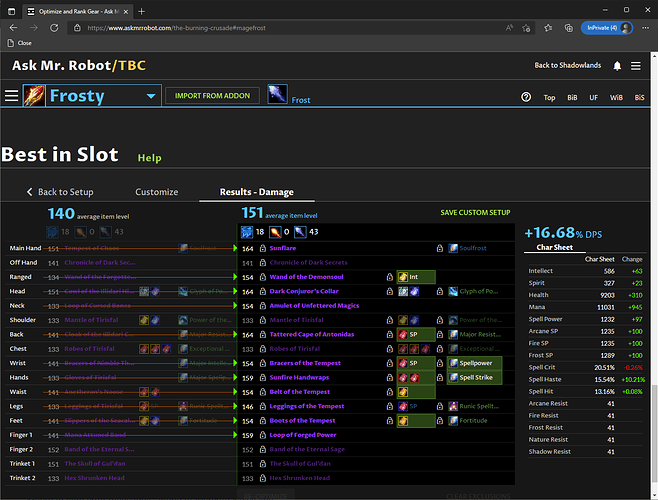 Forbid T5 shoulders, and it replaces the 2pc bonus with gloves and legs.

Block the gloves and it goes back to the robe and adds the cowl: 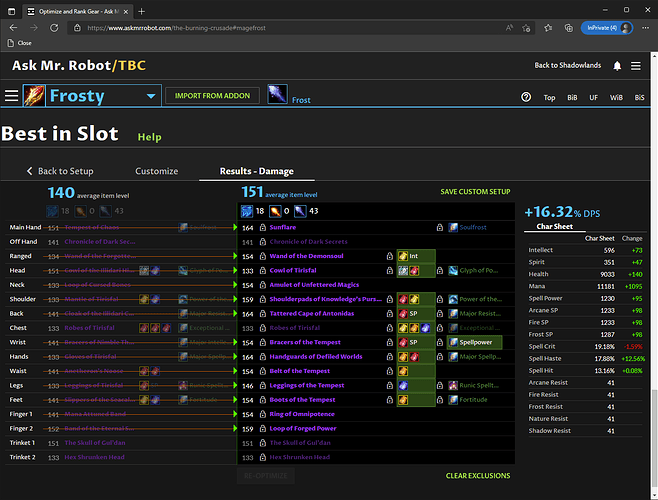 It claims the mantle is 4.07% better than T6 shoulders, which have more int, more stam, more spell power, more crit, the same sockets with the same socket bonus, and spell pen not included on the T5 shoulders. The only stat where the T5 shoulders are better is 3 extra spirit. The glove comparison I provided earlier has the exact same stats except the non-T5 piece has more of every single stat.

So the only possible explanation is that the optimizer is incorrectly valuing T5-2pc, for whatever reason.

And just for good measure, once you do finally exclude all of the other T5 junk (meaning it cannot possibly construct a set involving T5-2pc), it gives a much more meaningful result, and has somehow realized that T6 shoulders are, in fact, better than T5.

I think you might have something cached? When I load that snapshot, it picks 4pc tempest. Have you tried clearing the browser cache?

There is no possible way the 2pc has any value for a frost mage. The code has no calculation for it at all, because it is not applicable. It is literally impossible for the T5 2pc to be given value for frost in the optimizer.

This is what I see when I load the snapshot you provided: 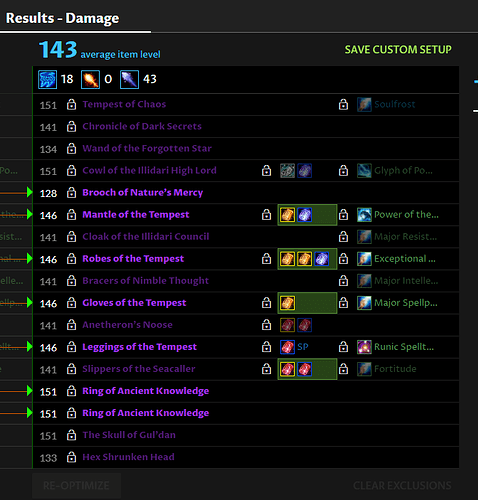 There is no possible way the 2pc has any value for a frost mage.

Well, I agree, but your optimizer doesn’t.

I think you might have something cached? When I load that snapshot, it picks 4pc tempest. Have you tried clearing the browser cache?

You can see from my screenshot that I was in a private browser tab, so that’s pretty unlikely, but just for the sake of complete verification, I loaded the optimizer in a completely different browser (Chrome instead of Edge), from which I’ve never loaded your site before. Selected Frost Mage under “Generic Character” and then changed “Release Phase” to “Phase 5 (Sunwell)” and this is the result.

This is exactly what I did to generate the snapshot above, but here’s the one from this experiment: e1d05d6248d14db7b7ce9ff4e0b6d790. I also excluded the mantle to verify that the behavior was the same as described above, and that yielded this snapshot: 4349e8ce71f24d6a9fe5374b8c393e5e. 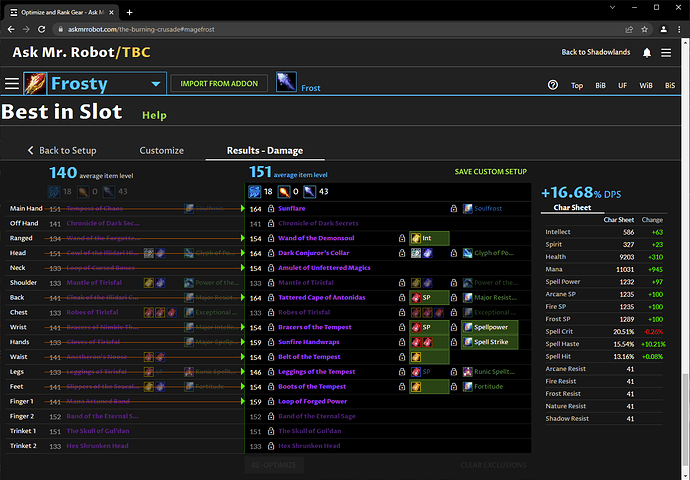 Ok, I see it now. You can save a snapshot with the setting that create the issue, just FYI - then I will see exactly what you see.

There was an issue with the t5 2pc, but it had nothing to do with arcane blast, since that spell is not involved in the calculations at all. Once I saw what to look for it was an easy fix. We can post an update tomorrow.

You can save a snapshot with the setting that create the issue, just FYI - then I will see exactly what you see.

I generated the snapshots by clicking on the “create support post” button from the screens showing the errant behavior. Are you saying there’s a better way?

No, that’s the way. I meant you could create that after you set the settings how you want.

When I loaded your initial snapshot, the phase filter wasn’t set to phase 5, so I wasn’t seeing the issue. Once you explained that you saw the problem changing it to phase 5, I was able to recreate the issue.