Future Phase Items Not Being Filtered

Can you guys set a filter for future phases? There are items (Draconic Infused Emblem <Phase 5>) from Drakk in URBS being shown whenever I hit the upgrade finder, however we are only @ Phase 3.

The same happens when I click on Best in Slot, even after selecting Phase 3, there are Phase 4 and above being displayed.

We tried to set the phase on items using whatever information we could find online.

If you see particular items that are not filtered properly, could you let us know which specific items (full name and/or ID) and which phase you think they should be tied to?

So far you said Draconic Infused Emblem won’t be available until phase 5?

Awesome! Appreciate the help – chasing down all the source information and phases hasn’t been easy.

So I used Wowhead in order to filter the main items from dungeons.

Below are all items that will be introduced in Phase 4+.

I think this should help for the time being

I’ll take a look at these – but it was also my understanding that some of these items were added right away rather than waiting for the historical patch to which they were associated. So we’ll have to try and verify this information.

@renrico I’m looking into the item source data. I have some proof that items are dropping that are listed as P5 on wowhead, but Blizzard said they’d be available in P1. For example, soot encrusted footpads, someone sent me information that their character has that item. I have this for several other p5 catchup items.

So we have all of those items listed as P1.

And then there is this thread, which is confusing to me. It seems like the sources are conflicting, saying catchup won’t be available until p5, and others saying it will be p1. That or I’m tired and my reading comprehension is shot.

r/classicwow - Welcome to the /r/ClassicWoW Subreddit AMA with the Classic...

If anyone has more information or proof these do / don’t drop, let me know (hard to prove they don’t drop, but you never know if there is another blue post out there somewhere).

Heya guys! It’s been a while!

I can back up that the P5 items aren’t in; if that Draconic Infused Emblem were in the game, things would have been very different gearing up for raids! A lot of those items are straight up upgrades over MC gear.

Anywho, I thought it relevant to also point out I’m pretty sure Argent Dawn shoulder enchants are unavailable until Naxx (P6) comes out! It’s tough to verify, since I’m not Revered with AD and can’t confirm if I can get the quest or not, but it looks like AtlasLoot for Classic is on point (plus it makes sense for all the Argent Dawn that doesn’t become available until Naxx to do just that!)

That said, I’m not sure where their info came from, but AtlasLoot Classic has been spot on for which phases items are available in Classic (except for the exceptions, like when Blizz pushes content out ahead of a phase).

The Argent Dawn resistance shoulder enchants are definitely in, as those have been in game since early vanilla and have been used in classic from the beginning.

During vanilla Blizzard did add new rewards to the Argent Dawn every now and then which will be replicated in classic - they added a formula for a healing bracer enchant with BWL (phase 3) for example.

So it just shows everything that is in classic. a specific example is Spellweaver’s Turban being shown for general drak in ubrs tho it wont come until phase 5

@asashdor @p2mc28 I installed AtlasLootClassic and I looked up the Draconic Infused Emblem as an example. I see it in this addon with a 1.9% drop rate off General Drakkisath in UBRS. 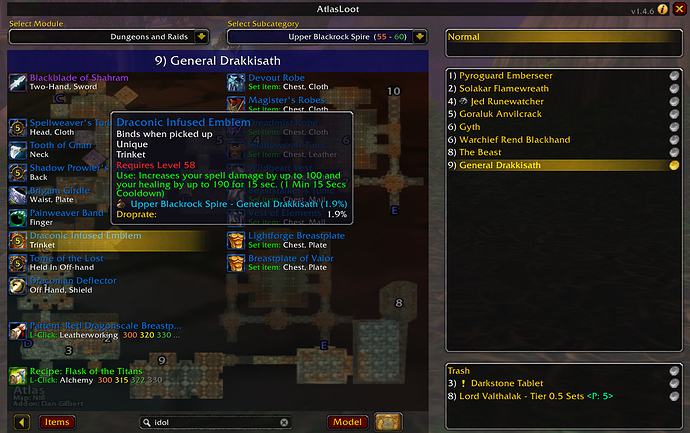 Am I missing some piece of info in the addon that you are saying it isn’t in game yet, but what I see shows it IS in game?

Thanks for entertaining my questions and followups - I am not currently playing classic, so it’s good to have people like you who are able to help answer a few things.

The addon does include everything regardless of its availability and just includes drop rates from Wowhead (i.e. most likely old Thottbot data) which might not be accurate for the current phase.

It does show which phase an item will be added in though - that’s why some items do have a number on top of the item’s icon.

Ahha, thanks. I thought the % was from the addon tracking drops it sees for itself, which is why I thought it was live. Appreciate the help. One more question: do you know how they get this information? How do they know it isn’t being released until phase 5? Is that from wowhead too, or from their addon drops?

Edit: Actually, AtlasLootClassic is showing that Soot Encrusted Footwear drops in P5, although I have someone who already has it. I am asking for a screenshot of some kind to be 100% sure. In which case, I wonder if AtlasLoot is pulling everything from wowhead?

Since I can’t get a screenshot and definitive proof that these items exist, I decided to set them to phase 5 instead of phase 1 as we previously had it. If we see these items show up, I can go back and update it again.

This will go live in our next site update. Thanks for the help.

This blue trinket of item level 63 goes in the "Trinket" slot. It is looted from . In the Trinkets category. Added in Classic World of Warcraft.

I was going to create a thread about this but saw this one.

“Thuzadin Mantle” off Baron in Strat UD shows as an upgrade but its not available yet.

“Don Mauricio’s Band of Domination” off Darkmaster Gandling in Scholo shows as an upgrade but its not available yet.

Right now the Upgrade Finder shows everything from those sources regardless of phase (since some of the searches are e.g. for raids that aren’t even available yet).

I can change the Dungeon search to obey the currently released phase – that is probably what people would expect.