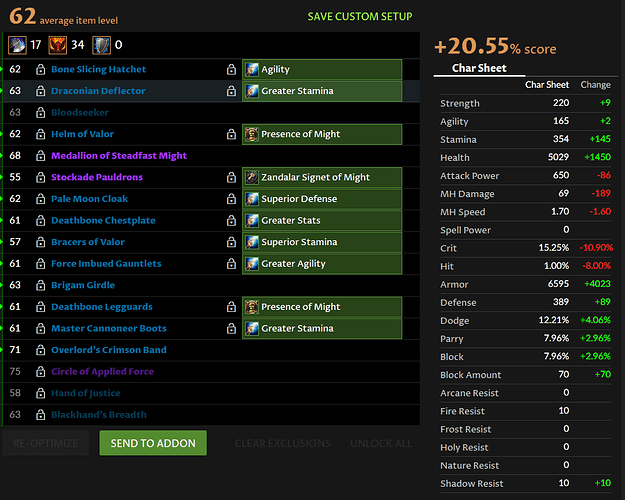 There is no point in having the best mitigation gear at your disposal if you cannot hit the boss in order to generate and keep threat.

We may add a way to let people force certain restrictions – on the list of future features.

In the meantime, try lowering the toughness slider a bit to favor DPS (threat) more. That should pick up more hit on your gear.

Unfortunately I did try that, I moved the slider step by step, however there was only 1-2 instances where the hit was capped and it was only on DPS strategy

I think that informs you a bit, though - if what you care about most is maximizing threat, then getting lots of hit makes sense. If you need to be tougher, losing hit is ok. You’ll never hit on every attack, even if you are at the hit cap - so it’s really not a big deal to be under that hit cap.

Yeah being hit-capped is not necessary for threat generation. Some people prefer it on fights with sensitive taunts (since taunt can miss), that’s the only reason to want to force it to be capped.

Actually taunt is a spell in classic and is not effected by hit at all. It was changed for WOTLK to be effected by hit, but in classic there is no way to improve it’s chance to be resisted other than T3 set bonus or trinkets that reduce spell resist chance.

Also, hit is absolutely necessary for threat generation. Missing your yellow abilties (especially those that cost a lot of rage like Shield Slam/Bloodthirst) obviously sets you way behind. DPS is able to push threat easily with modern day knowledge/1.12 itemization + world buffs, you don’t want to be relying on RNG with a 5% miss chance on yellow abilites instead of 1%.

That’s why the meta is Fury/Prot tanks DW tanking in mostly dps gear, because you just can’t keep up otherwise, plus the healers can handle it. Every real tank’s mitigation set is still hit capped.

Hit is certainly a good stat for threat generation, but you don’t necessarily need to be exactly at the cap, is what I meant. Same logic as for a DPS spec – hit is a good stat, but there’s nothing “magical” about being at the cap if to get there you have to sacrifice other good stats.

(The argument for getting exactly to the hit cap on an ability like bloodthirst is not compelling – it has no intrinsic threat multiplier, its threat is equal to the damage that it deals. If your normal bloodthirst hits for 100 damage (made up number), if you miss, you lose out on 100 threat. If you crit, you generate 200 threat. But if you don’t crit… you lose out on 100 threat… since you do 100 less damage. You don’t see anyone worrying about not having 100% chance to crit with bloodthirst though.

For abilities like shield slam, hit is a bit more important and the argument is stronger, since a good chunk of extra threat is baked into the ability.)

That said, we put the toughness slider on the optimizer so that you can favor more threat/damage-oriented gear over toughness gear. The further you go towards threat/damage the more hit it will favor.

And yeah that’s right… forgot that taunt uses spell hit in classic. There aren’t that many sources of spell hit for tanks in classic… maybe that one on-use trinket from ZG could be useful if you really don’t want a taunt to miss.

Also as mentioned above, we’ll probably add a customization feature that lets users tweak their preferred stats a bit more, e.g. force it to get more hit. Ultimately it doesn’t really matter to me if people like more or less hit than our mathematical model does – go for whatever works for you. That feature is in the works, but it significantly complicates the optimizer so we’re still testing it.