I think I just don't get how Add to Bag works

Argh. I think I’m just completely failing to understand how Add to Bag/Upgrade Finder works, compared to Best in Bags. Can someone please tell me what I’m doing wrong? Let me know if you need more info. I had to combine the two images into one because as a new user I could only embed one.

If I add two items (both potential quest rewards) to my bag under Upgrade Finder, I see what is shown in the first screenshot, both items are a 0.45% upgrade. I pick one. But once I already have it in my bags, it shows up as a downgrade. 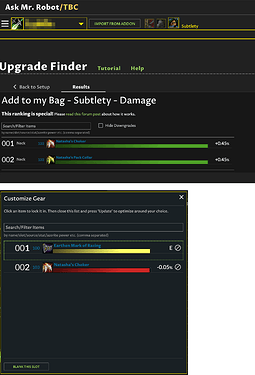 This is, of course, the same character, same setup (I only have one), the difference is only that the item is now in the bag. What am I doing wrong? Am I misinterpreting what Upgrade Finder is saying? I read the post about the ranking being special and I don’t think it applies? Help. I feel like an idiot.

If you provide us with a snapshot, we can reproduce your case with all your settings and give a better answer. It’s tough to figure out from a screenshot. Instructions on how to do that here:

And finally, one more attempt at Upgrade Finder including the original neck I’m wearing is d035860a884b4efcb5d9f2445be3ec4c

This last Upgrade Finder with three items added to bag produces this result, different again from the other two:

When I try all of those, I see the same result. The pack collar is a 0.45% upgrade, the other two show as already owned. I wonder if something is getting cached… try the following:

On Best in Bags in the options, change any setting, e.g. set max on-use items to 3 instead of 2. Then optimize. Then try Add to my Bag again. It should look like your screenshot in your last post with all 3 of the items.

Then you can change the settings back to what you had before. Let me know if that clears it up, and I can look into why the caching could have gotten stuck in this case.

I tried changing (and reverting) several settings, and the two results are still different. 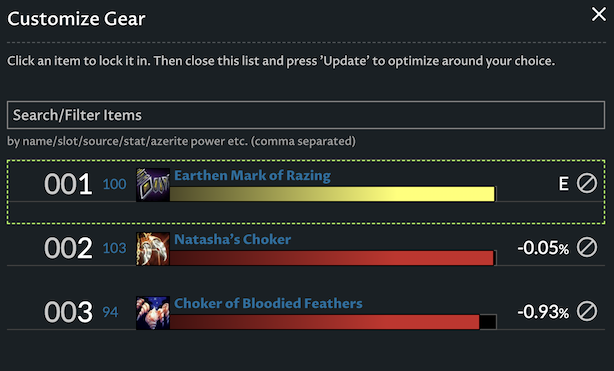 Since I can’t go back and pick up the other neck, I guess I’m just trying to figure out how to make sure it works correctly next time… and the Upgrade Finder still isn’t matching the above. This Upgrade Finder snapshot: 4d94b0dcf50a4c9494fb676d55327ed9 shows everything equal except the one I didn’t pick up:

Shouldn’t those two be the same (assuming Upgrade Finder is correct) in terms of the necks in my bag showing equal and not as downgrades to current in Best in Bags? I still haven’t eliminated the possibility that I’m misreading/misunderstanding something about how this works…

I can’t reproduce that first screenshot of yours using the snapshot provided… I’m not quite sure why I would see something different… I’ll see if I can figure it out.

When I mess around with your character and the Add to my Bag search, I always get the same rankings, they look more like the second screenshot. We just show “owned” for gear that you already have regardless of how it scores – the idea is that Best in Bags will either use it or not depending on your other gear. The purpose of the search is more to tell you if getting some new item would be an upgrade were you to add it to your inventory.

So when you click on the neck in the inventory after optimization, your comparison with the other two available necks doesn’t look like mine (001 Earthen Mark of Razing, 002 Natasha’s Choker, and 003 Choker of Bloodied Feathers)?

I guess what I was trying to show is that Upgrade Finder, before I owned the reward, was telling me (per my original post, where you can see a screenshot of that) that Natasha’s Choker and Natasha’s Pack Collar were both upgrades with an equal value, but once I had Natasha’s Choker in my inventory, it started saying that Natasha’s Pack Collar would have been a better choice (and Natasha’s Choker was a downgrade, which is why it wasn’t recommending that I swap it in). I obviously can’t go back to the time before I chose that upgrade. I guess I could vendor it and try to run it through Upgrader Finder again? But even now (I think) I’m seeing different interpretations of the gear I have via the two features. Best in Bags says that Earthen mark of Razing is the best. Upgrade Finder seems to imply there’s no difference between that and Natasha’s Choker? Or is it just not rating anything that’s not the best choice and that’s what the yellow bars mean?

But again, I guess it’s more about the real decision that it was showing me (both original neck rewards being the same, +0.45%) when one of the turned out to be a downgrade once it was in my bags and being evaluated by Best in Bags. If you think that’s due to some sort of caching and shouldn’t repeat, that’s cool. But I’m pretty sure this isn’t the first time Upgrade Finder was “wrong” (in that it didn’t correctly predict what Best in Bags would recommend once I owned the quest reward) when I asked it to compare two blue quest rewards. I just wish I’d taken screenshots of the first set of rewards too.

Again, if I’m misunderstanding how this feature is supposed to be used, and it’s not meant to match what’s shown under Best in Bags with the other two owned items being downgrades, that’s fine too, I’m just trying to get clarification if that’s indeed the case.

Thanks for your patience!

Oh I see – your first screenshot was the ranked list that you see when you click the neck slot on your Best in Bags result, it wasn’t the list from the Add to My Bags upgrade finder result.

Those ranked lists won’t always match because they use different ranking algorithms. The list that you see when you click on your next slot in the Best in Bags result does a fast and simple ranking: leave all of your other stuff the same, and swap in that necklace. Show the score difference. This ranking method is also used for most Upgrade Finder searches as well, where several hundred items need to be ranked all at once.

Add to My Bags does a far more intensive ranking. It adds a new item to your inventory, and then it does a full Best in Bags optimization with that item available as an option. It then shows you whether your score would go up or down were you to obtain that item. This type of ranking takes a lot more time to run, thus why we made a special function for it with a limit of 10 items. You can read more about how Add to My Bags ranks things in this post:

The Great Vault is a weekly reward for raiding, doing Mythic+, and PvP. You can read more about it here: https://blog.askmrrobot.com/how-the-great-vault-works/ The Great Vault Upgrade Finder search will help you decide which reward to take. Import your Rewards As long as you have version 96 or later of our in-game addon, we will automatically read your available rewards every time you export your character. So when you have rewards available, simply export your character as normal, and you wil…

(This post was written for the Great Vault search on the retail site, but it works the same as the Add to My Bags search.)