Is it possible that Shadowflame Prism is undervalued for Shadowpriest?

BIB and Upgrade finder don’t suggest using SFP yet it seems to be dominate in all PvE settings right now. 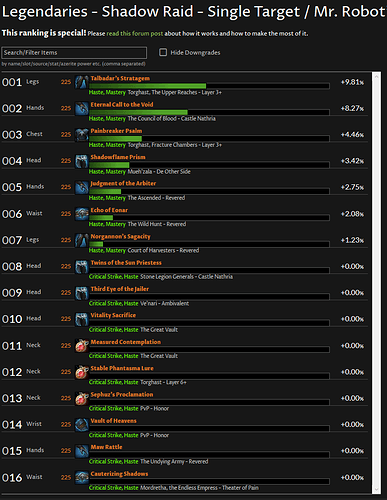 Is it possible there is something wrong with how it’s being modeled in AMR or does something else explain it?

I know how popular it is, so I have double, triple, quadruple checked our implementation of it. I can check again… but I really don’t know why it is so popular, especially for any sort of single target fight. Maybe because it’s easy to get full value out of and has less randomness than eternal void? The one minute mindbender lines up nicely with a lot of fights in nathria as well, so that could be part of it.

For a long time no one was using talbadar’s stratagem because the implementation of shadow priest mastery was bugged in simc, so they thought it was worse than it is. They fixed that a while ago, though.

We rank shadowflame prism as the best legendary for mythic+, which makes sense to me. The single target is what doesn’t make sense.

Is it possible the rotation is incorrect when using Shadowflame Prism? I am new to looking at the logs, but a simulation I did seems to go against what I’ve seen recommended on sites like wowhead. The AMR rotation ignores Shadow Word: Death usage outside of execute for example.

The recommended rotation I’ve seen is that on opening after casting Mindbender, but before casting Voidform, Mind Blast and Shadow Word: Death should be cast causing two extra Shadowflame Rifts. Then the rotation continues basically as normal, but with the inclusion of a second cast of Shadow Word: Death, which should be possible due to the legendary’s extended duration of Mindbender.

I wish I knew how to create rotations with AMR so that I could play around with it, but adding Shadow Word: Death to the rotation while Mindbender is active and getting an additional Mind Blast before Voidform might make a difference.

This info is just what I’ve seen online though, and it’s possible it’s completely wrong mathematically so my apologies if it is. For example, wowhead also recommends casting Fae Guardians before casting Voidform rather than after, as well as precasting Vampiric Touch followed immediately by Shadow Word: Pain instead of applying them during Voidform.

I could play around with it some and see if there is any difference. Those all sound like pretty minor tweaks, so I wouldn’t expect a big swing based on that.

I went and got shadowflame prism on my priest and tested this more in detail. Our calculation for shadowflame prism damage is still spot on. I tried some of those rotation adjustments and they made only a very minor difference in single target damage.

I can put up some tweaks to the rotation, but the ranking of the legendary won’t change as a result. I still feel good about the valuation on our website.

Using shadow word: death outside of execute on a single target to trigger shadowflame is nearly dps-neutral.