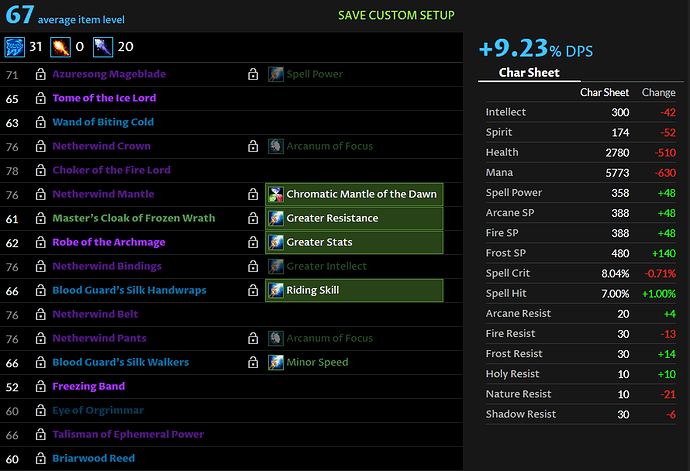 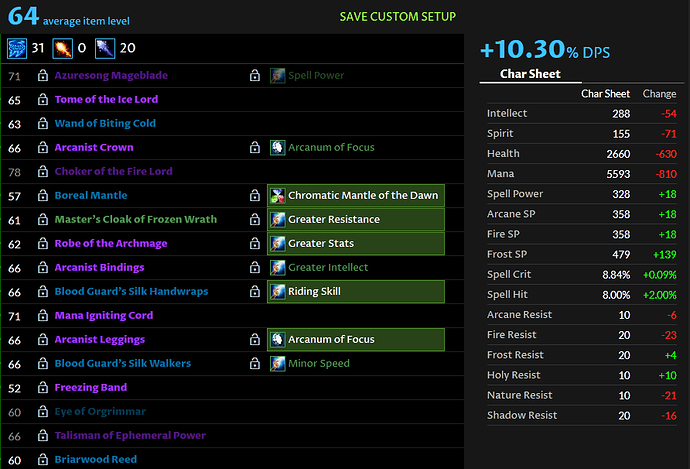 The scenario I am running is: 90 and 30 seconds fight with all possible buffs, including World Buffs & Mana Potions.

Whichever scenario happens in-game, I would never go oom that is a fact. However I have read before that if I choose the shortest possible fight (30 seconds), AMR would “disregard” mana and go with the highest possible DPS gear.

However, by chance, I was fiddling with the gear setup and found that when I locked Arcanist Crown on the 90s fight, because I wanted more hit, AMR ended up optimizing it better than the 30s.

If we compare the setup I found by mistake with the setup chosen by AMR, there is no way 8 SP gives a better DPS output than 1.2% crit.

I would like to see AMR give the best combination of gear with the highest possible Spell Crit / Hit / Power disregarding Mana. 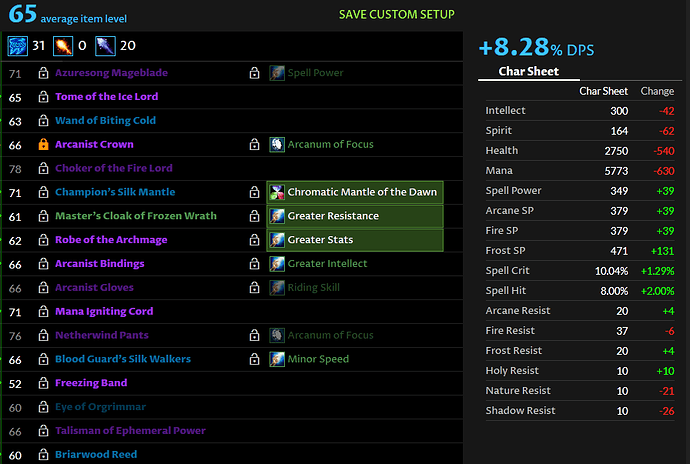 I’ll take a look at this on my development version. It’s going to be really close between those two sets of gear, but I can find out for sure if there is a problem.

We aren’t ever going to disregard mana - setting a very short fight length effectively does that already, though. In the 30s fight, mana isn’t going to be a limiting factor.

I’ll have to look at your specific character… but a frostbolt crits for double damage with the talents you have. I’m not sure how much your frostbolt hits for off the top of my head, but it’ll be around 1000 non-crit depending on raid buffs. 9 spell power and 1% spell crit will be very close as far as how much damage they give you on average.

I don’t know if this helps, but this is the log for a fight with my current gear (3rd image setup) with full raid buffs and world buffs, minus Darkmoon.

I took a look at it - for the 90 second fight, I’m calculating a 1.8 DPS difference between the two setups. The optimizer isn’t wanting to pick the slightly better one for some reason - I’ll see if we can figure out why, since it should theoretically always pick the highest score. But, at least you know the scale of difference we are talking about here

I fixed one bug where it was favoring 5 piece netherwind because it thought the 8 piece bonus was active with only 5 pieces.

By the way, this 1.8 DPS difference you got, would it be possible to display it on the optimizer?

Thanks for your time and patience <3

It’s possible… but we generally shy away from it because the absolute value of our calculations might not match everyone’s experience. The relative differences between setups is generally very accurate from what we’ve seen, and that’s all that matters to rank the gear.