I cant see where to find out what stat priority AMR is using for mistweaver monk but when I look up BiS for raid mostly HPS healing it appears to not weigh haste very highly and want to increase vers even more when as far as I know that is a low priority stat for mistweavers?

Hey ! I’ve noticed the same thing but i’m waiting raid oppening to see how it play.

I remember monk had in the past very crit/vers stats oriented due to mana issue but i dont think this is what appening here.

It’s another approch compare to other sources; wait and see i guess.

With the +30% haste from “Invoker’s Delight” and “Gift of the celestial” maybe stacking haste isn’t as usefull idk ?

I am going to circle back and do another round of refinement on the healers after the raid opens.

That being said… I don’t really see how haste is a good stat for mistweavers, especially if you take invoker’s delight. And if haste isn’t good… crit is default best stat. Then you are picking between vers/mastery. Vers will probably win out unless you shift around your settings such that you are more single-target healing focused.

So, just by logic, crit/vers seems like the best stat build for maximizing output.

From most of the guides I’ve been reading and people from the monk discord it’s definitely haste this expansion that we want for the reduced cool-down of rising sun kick, blackout kick and essence font cast time and tick. The mana issues arnt as much of a problem anymore as we have access to both spirit of the crane and mana tea.

Is there a way I can adjust stat weights myself? 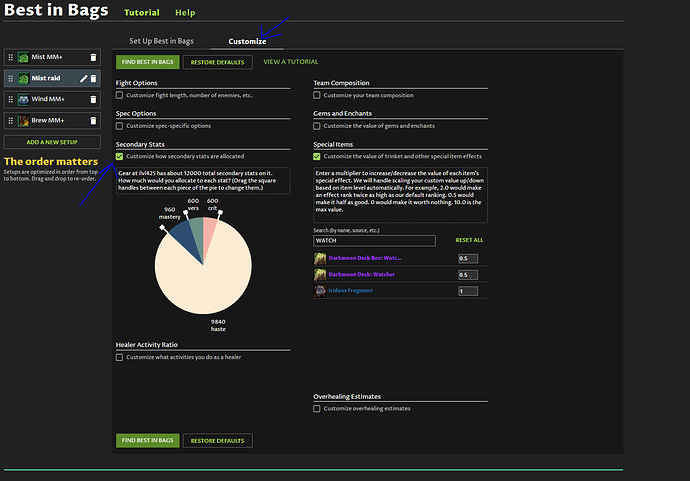 For @Swol small UI improvement; could we have the number show as % ? (For the later todo list :p)

We can set up a canned “build” that gets haste like the guides are suggesting you should do.

I will say that I can’t see any way that one would ever come to the conclusion that haste is a good healing throughput stat via calculations. Maybe it makes it feel better in-game or something, but the math just isn’t there. Too many mistweaver abilities don’t scale well with haste, and on top of that, you will run out of mana too quickly unless you simply don’t cast spells like enveloping mist or vivify hardly at all, which might be what people are doing - but that doesn’t maximize your healing output, so that doesn’t make sense.

I feel like they are saying: ok, you can do this thing where you rely on renewing mist, rising mist, essence font and the odd enveloping mist for the whole fight without running out of mana, so do that, even though you’ll do less healing. And get haste because you can do it faster, even though that won’t really make you heal more, but you’ll do more damage. Even if you purely look at doing damage, versatility is still just about as good as haste for a mistweaver.