I’ll elaborate further on my apparently not so simple question about the Naxxramas shoulder enchants in the Classic and WotLK sections of Ask Mr. Robot.

To be specific, I have listed the shoulder enchants shown for each spec in each optimizer:

For a graphical illustration, I also post the shoulder enchants lists for a generic Protection Paladin in both optimizers: 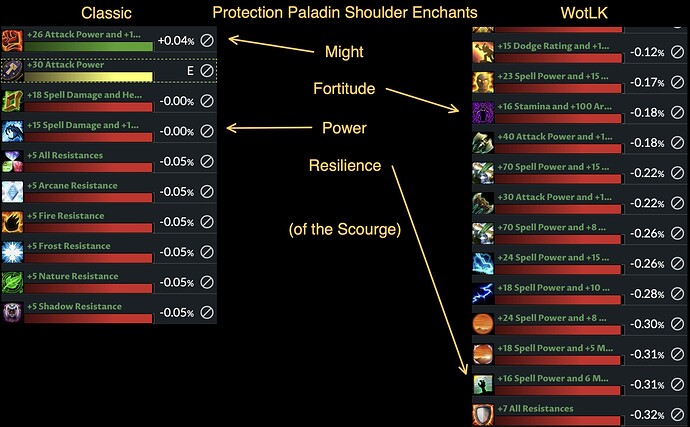 Conclusion: We never see Resilience or Fortitude in the Classic optimizer, nor do we see Might or Power in the WotLK optimizer. I think this should be changed. For WotLK, the Naxxramas shoulder enchants are no longer available in the current game version 3.4.0, so one could argue about whether they should be ranked at all (some chars probably still have them though). However in the Classic optimizer, which most people probably use for the current game version 1.14.3 on Classic Era and Season of Mastery realms, all four enchants are still available and should be ranked where they make sense.

Thanks for the post – I did read your other post but we are backlogged due to the holidays. I’ll take a look at it this week.

Yeah seems those 2 enchants just didn’t get parsed for some reason – available classic data is kind of messy so there’s a lot of manual filtering going on. We’ll update that and it should show up on the classic site and get filtered out of the wotlk site.