This checkbox appears on the Raid, Great Vault, Add to my Bag, and Creation Catalyst searches. When checked, set items will be ranked as if you have the complete set (both the 2pc and 4pc bonuses activated). This allows you to look ahead and determine if the item will be a nice upgrade down the road when you get more gear.

Please note that this is an approximation – we don’t know exactly which items you will end up getting when you complete your set!

This is a new search that will look at your inventory and find all items that can be converted into tier 28 gear at the Creation Catalyst, and rank the resulting items. This is something of a beta test of the feature – there are a few details that we aren’t quite sure about yet. We’ll just have to see how it plays out this week in-game.

Also, we plan to update the UI to show which source item will turn into each new item. We wanted to get the feature out today for people to play around with it the day the Creation Catalyst goes live though, without delaying it for a small UI improvement.

I was looking for this today! Thanks so much for adding the features.

Will you also be adding a way to show if they item were upgraded fully with valor/conq? That way we can make a selection before we spend? Would be super cool!

Just tried it out with adding my new GV stuff, and it doesn’t seem to suggest upgrading any of my 252 tier set pieces to 278 versions with stuff I have in my bag. Kinda misses the point for folks that already have tier and want to look at how to improve further.

The upgrade finder told me to change a cloak at the creation catalyst so I did, afterward, I realized it said to change an item that isn’t even tier, now I’m stuck for another week with only one piece. I guess I didn’t understand the feature on the site, I assumed it was going to prioritize tier in the catalyst section. Lesson learned! To top it off, I ran Best in Bags after changing my cloak and it wants me to use a different, lower cloak entirely, so the entire experience was a giant waste.

I’ll take a look at these cases – @zohna if you can provide a snapshot, that would help. Also, converting an item that is not in one of the set bonus slots produces a non-set “tier” item of the same kind (e.g. boots convert to boots). Usually this is not worth doing until you have all the set bonuses active… and even then it would be a marginal gain usually. In theory the upgrade finder should show this.

@xxparrotxx I don’t see any 278 items suggested in the list, so I wonder if my code to detect which items can be converted isn’t catching everything. Which items in particular is the game letting you convert at the catalyst that are ilvl278 that you own?

@yellowfive I checked every character who had eligible items that could be converted into tier pieces and the new feature did not show those items in the list at all. The only items that it showed were non-tier slots. I think it may not be working as intended.

I will second the fact that the creation catalyst upgrade finder does not show pieces that can upgrade to tier. For me it was only showing back/waist/feet when I have head/chest/legs/shoulders that are all upgrade options at the catalyst.

Thanks – I’ll take a look and fix that today, there must be something going on with the filter for that search.

I just posted an update that should resolve the issue with items missing from the list for the Creation Catalyst search. It also now shows the source item for each item in the ranked list.

Let me know if you run into any other issues with the new features.

@yellowfive Looks like it’s working. Thanks for the update.

An example would be the Rakishly Tipped Tricorne.

This blue leather armor of item level 155 goes in the "Head" slot. It is looted from Timecap'n Hooktail. Added in World of Warcraft: Shadowlands.

Just so you know in general, @zhona. The only 5 slots that give bonus from tier are Helm, Shoulders, Chest, Gloves, Legs. This is the same for all classes. So those will be the slots you’ll want to target if you need the set bonus 2pc/4pc.

The creation catalyst also allows you to create non-bonus tier gear for the other slots, which often have more ideal stats for your spec, and offer xmog of that ilvl. Here’s the xmog you’ll get from those items: 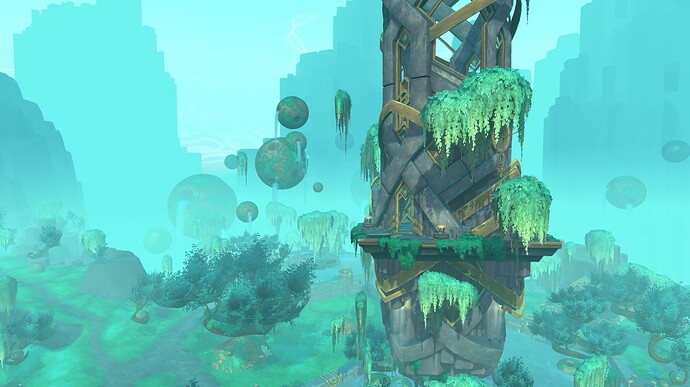 Creation Catalyst and Transmog - A Highlight to Obtaining Transmogs

In our previous post about the Creation Catalyst, one of the questions asked the most in the comments were about how would transmog work with the feature. To answer those questions, we've decided to organize this post highlighting how transmog will...

This seems to have fixed it for me! Thanks.

Side note - I’m wondering if you can also have the Valor section recognize tier bonus pieces that can be upgraded with valor?

Oh! Also probably much harder - any way to have a checkbox for the Creation Catalyst section that has it assume you’re going to max upgrade all your pieces with valor? This way you can see what the end result would be and the max benefit for using your valor?

I’m so glad you were able to get a quick fix for the tier not showing up in the Catalyst, thanks!

I can add those – I wasn’t sure if they could be or not. I had the 246 gear purchased with sandworn relics in there, but I can add these too.

@xxparrotxx I can see if I can get the valor section to detect tier items that can be upgraded after conversion. As for ranking items as if they were already upgraded to max… I can see if we can add that option.

Does BiS take into consideration the Creation Catalyst, or will do so in the future once you have more time to develop it?

Obviously for the tier-bonus pieces that are at the highest ilvl (Shoulders and Chest) for a certain difficulty, they are probably already the best, but for the ones that are not (Helm, Legs and Hands), there might be options in the raid from the last three bosses that could be converted into tier pieces to give a better ilvl. This is only considering items from raiding, there would also be numerous options from mythic+ and pvp, etc

Also, for the slots that don’t get the tier bonus, the change in secondary stats may still be an upgrade over the original piece.

Thinking of a way you could implement this, rather than having to include an extra item for every single piece of loot that you look at for the BiS optimisation, you could figure out the maximum ilvl that could be converted for each slot, and just add a single tier piece at that ilvl to your BiS candidate list. You could leave it to the user to figure out which item/s they need to convert to that ilvl, or you could put in a list of items that would work for the maximum ilvl.

It is a shame you have “wasted” a week but ultimately this is on you, why did you rush?
The post clearly indicates that it isn’t finalised yet and there was no way of testing it properly, there wasn’t even a way of getting addon exports with the new data in it.

Whenever Blizzard adds new stuff with log cooldowns or non-reversible changes it pays to have a good think about it and being patient is often the correct choice.

Doesn’t look like it knows that the loot from the Antros world boss can be converted.

I have Lattice of the Distant Keeper which can be converted but AMR is not suggesting it. 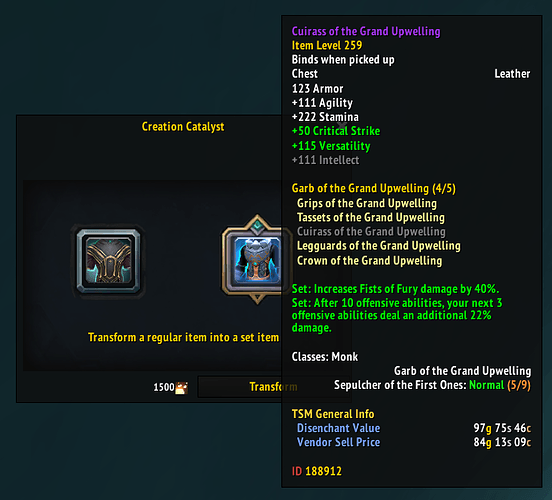 Thanks! It might be easier for me to explain what I mean if you want to hop on discord for 5 minutes. Let me know how I can help.

Thanks for the great work here!!

Have you considered adding in creation catalyst viability into the great vault upgrade finder? I could imagine scenarios where a vault item could look terrible as-is, but be a huge upgrade if taken and transformed to tier. Currently, the two upgrade sections don’t interact, but would be helpful if they did. Say a check-box on vault to consider items for creation catalyst.