Numbers on healer trinket seems to be off

475 Ingenious Mana Battery In AMR says it can store 76125 mana but in game it only stores 16384 mana which gives inaccurate result. Also Zoatroid Egg Sac seem to give much higher simc healing result than actual game play I don’t know why.
And for healing simc could you implement option that remove damage reduction as healing from simulation result? I know damage reduction is important and plays big roll in game, but meters and log site(WCL) doesn’t reflect it. I am done with 12/12 M so I am more interested in numbers that shows in meters and log. Thank you

I think there is a problem with the tooltip for that item - the amount of mana that it stores in actual simulations matches with in-game values. I recently re-tested that item because someone was asking about it. When I look at the amount that it stores in the simulation, it matches what I see in-game. I’ll see if we can fix the tooltip - in general we’ve been working on a new tooltip parser because of some problems we’ve had getting the right tooltips to display due to the weird spell data.

The zoatroid egg sac as been tested and compared to in-game logs. I would need more information on exactly what you think is wrong with that one - the simulations and ranking of it seem to make sense to me.

I don’t have any plans right now to remove damage reduction effects from the healing breakdown on the simulations. I know that output is invisible on logs, so “counting” it won’t really help you maximize parses… but it would take a lot of work to separate that out and create a different metric. I like that the simulator gives you a realistic view of how your build/stats affect your true efficacy. If you want to use the simulator to gear for topping meters… there are a lot of other changes that would need to be made as well to help you achieve that result. Maybe someday I’ll have time to create that as a “mode” for the healing simulator.

I checked simulation log and I don’t think it’s just tooltip error. 475 Ingenious Mana battery suppose to recover 4096 mana every 5sec but as shown in attached image it is giving 19031 mana
https://www.askmrrobot.com/wow/simulator/report/52822aeab92e444988ca7a547a0f2d96

As for Zoatroid Egg Sac, I have 455 in game which shields for around 27k but in simulation it’s shielding people for 33k~124k which is improbable even with additional effect of trinket.
linking my log on Zoatroid Egg Sac.
https://www.warcraftlogs.com/reports/XzCGdcBWQv1w89mZ#fight=19&type=healing&source=29&ability=302935&translate=true
And here is simulation. Had to reply twice since I am new user and I can upload one image at a time.
https://www.askmrrobot.com/wow/simulator/report/576b574e7d20497e8d3e039cd56a39ea 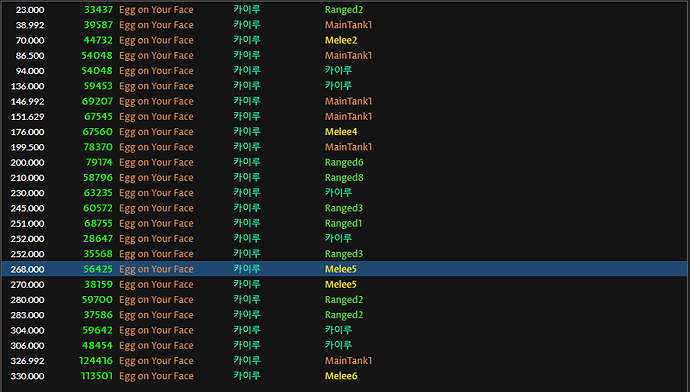 Ok, thanks for the links. I see what is going on. The spell data for the mana battery did not include the correct scaling type for that effect. I’ll update that scaling type and then it will give the right amount of mana. (I have no idea why blizzard is afraid to implement an item that actually gives back enough mana to be useful.)

And for the zoatroid egg sac I was reading the log wrong. That item was indeed messed up in the simulator… I’ll post an update for it.

Agree on mana battery. If it was like current sim it would be actually useful. Anyway thank you for the work on simulator it was of great help to me.