Working on my Twin Emp warlock tanking set, and I’ve noticed my in-game HP/MP are a few hundred off from what Mr. Robot reports. Not usually something I care about, which is why I’ve never noticed until now, but definitely a thing.

Here’s what Mr. Robot’s got (note I’ve also made sure to turn off all buffs/etc here too):
https://www.askmrrobot.com/classic#us/grobbulus/devloc 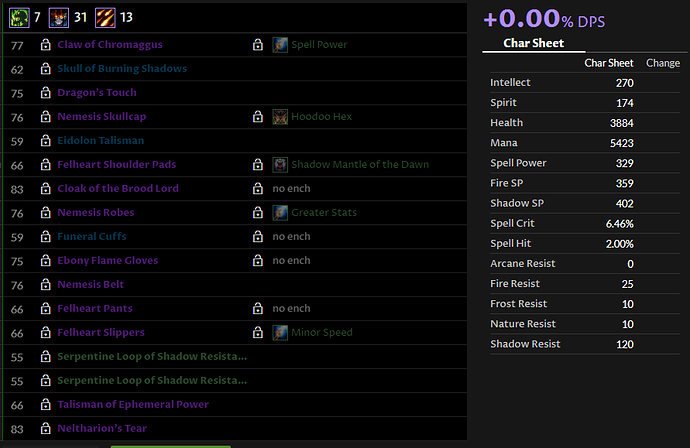 It looks like the talent Demonic Embrace isn’t been factored in? Stamina isn’t shown, but Spirit is listed as 174, where in-game it’s stated to be 160.

That doesn’t explain mana being off by 280 tho.

Also of note:
There are a few items that haven’t been linked to P5 (though that is moot soon) but the Shadow Guard (and other “Guard”) enchants for helm/legs aren’t until P6.

Without having specific data of your character its most likely impossible to say what’s going on there - and that data is not availabe for other people when using the direct link to a character. The best way to provide that would be to create a snapshot id with the “Help” button above Best in Bags as that will include verything (i.e. gear, settings, etc.) and to post it here.

How embarrassing, I used to help with support around here years ago. Of course I should need to supply character data!

This is specifically looking at my “Twin Emps” loadout.

When you are looking at stamina in-game, do you have blood pact?

Nope, zero buffs. No self buffs.

In Game
3924 Health
4333 Mana <— I’m noticing that looks like it just might be a rounding error or maybe base health is off.

When I include that it comes out to 3905 health. The small difference in health/mana compared to what you see in game is probably some little difference in how they calculate it… it’s actually quite a pain to reverse out the exact formula that they use. But once it is that close, we find that it has no impact on gear optimization or decisions.

For retail WoW, they got rid of a lot of the weird little adjustments that they used to make to some of these calculations that had no significant impact, but made it hard to match the exact number to what was shown on the in-game character sheet.

That’s what I suspected too. Glad it’s just display. Thanks!

I just posted an update that should resolve this display issue, you will need to refresh any open pages to get the change.