There is something amiss with this item.
Just bringing it up for review and possible resolution. 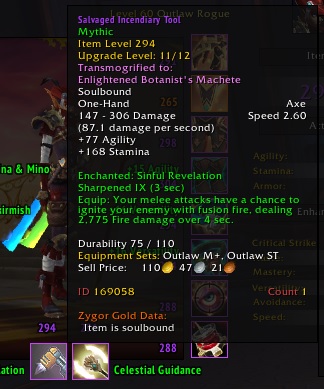 The tooltips can be difficult to scale without the proper context, since it depends on item level, versatility, etc.

Our simulator and optimizer are using the correct values, and if you look at the tooltips on our site when setting up your character in the optimizer or simulator, it should be correct. Note that sometimes the in-game tooltips include versatility as well; we don’t do that on the website, so they won’t always match exactly.

Blizzard is pretty inconsistent about how that handle the tooltips in general… so don’t worry about minor differences from the game and different sites. The actual damage dealt by an effect in-game rarely matches the tooltip anyway (which is super annoying, but doubt Blizzard will ever improve it).