Begining from the shadowlands for Balance Druid, trinket suggestion is not working. Best in Bag results and simulation results are not equal, actually not even close. 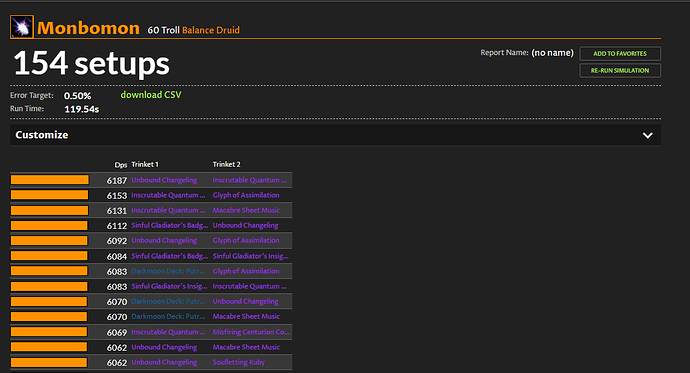 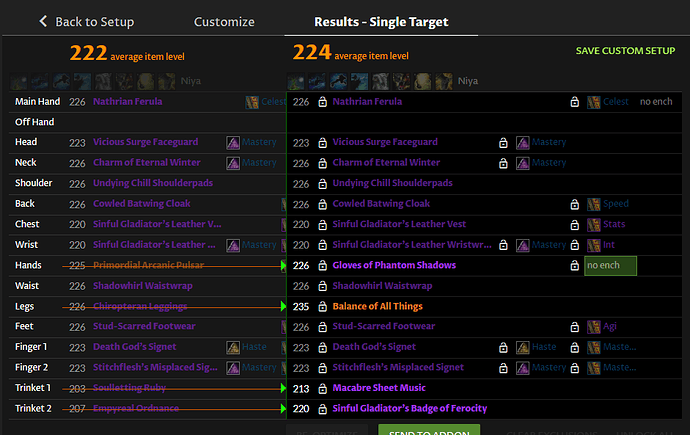 I would need more information than screenshots to be able to help you out. Press the “help” link next to the big “Best in Bags” section header, then press Create Support Post, and copy the generated snapshot ID here. With that I can see your exact setup and settings.

It is happening for all my setups

Your currently-equipped gear seems to match the Mythic+ setup’s solution, so I’ll look at that one as an example. The suggested trinkets are pretty close to what you see in the simulations – close enough that it will come down to your in-game experience and particular team.

The main difference in the simulation comes from the timing of using two on-use trinkets at the same time, and just fight length and on-use trinkets in general. Once you get down to a 1% difference one way or the other… it’s tough to say which way will actually work out best for you in-game.

If the fights you are doing work out such that you are able to get good use out of two on-use trinkets, go with those suggested setups. If not, set the on-use limit to 1 and re-optimize. And for particular trinkets… if they aren’t lining up well with your team’s fights (e.g. you have an on-use trinket that seems to just come off cooldown as the fight ends, which is the worst case for uptime), consider switching to a different one for that fight.

Either way though… you won’t feel much difference in power with any of the top setups on the average, and your overall performance and rankings won’t change much. For particular fights and your particular team, you may want to experiment though to see what feels best to you.