Where did my Heirlooms go in SL?

Went to update my BIB gear on my (now) level 34 hunter and none of her heirlooms are showing up as options. In fact, it appears that all my heirlooms have 0 stats on them. AMR is reporting that my “Man’ari” neck shows as only having the on-use ability, while in-game it has 15 crit and 15 haste at it’s current level. 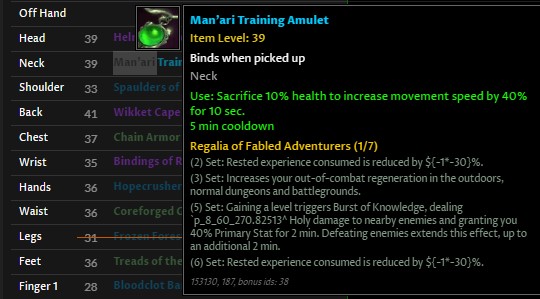 I think that a couple digits got cut off of your snapshot code, so I wasn’t able to try it.

For this case, you could also post the string of data that you copy from the in-game addon to the website. The most likely issue is that there is some bonus ID change that Blizzard made that isn’t getting read correctly for heirlooms. With your addon export I should be able to figure that out.

Similar problem, can’t select heirlooms to lock them & when I mous over current equipped heirloom items the stats are just armor, nothing else.

My heirlooms also have no stats, at level 50. 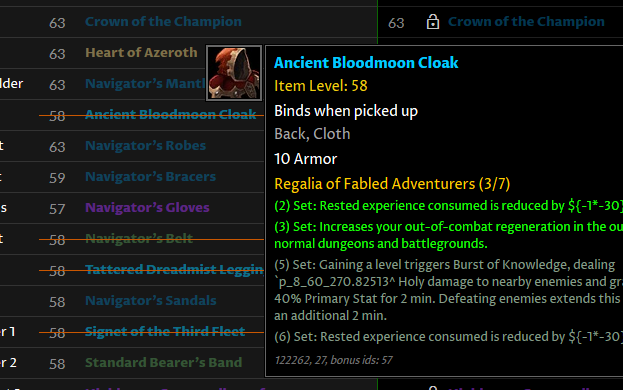 Also as an aside, the set bonus doesn’t activate at level 50, not that it matters for anything but the tooltip.

Here’s another if you need it.

Oh hey, here’s another that’s not an heirloom.

Another what? This seems unrelated… perhaps you’re talking about the punchcard trinket? We don’t really support that anymore – it required a lot of code to get it working, and since it won’t be relevant soon, it wasn’t worth keeping it on.

Later today we’ll do an update that should resolve the issue with stats not showing up on heirlooms. Turns out it was an issue with items that have a base item level of 1 (and thus the budget is zero and it has no stats at the base item level).

My bad. I thought it might be related since, like the heirlooms, AMR prefers an empty slot. I can see it being too much trouble at this point for upkeep.

The update is live that should resolve the stats on these heirlooms – you may need to re-import your character to see the change.

Regarding heirlooms, and again, I totally know that AMR is not about optimizing sub-max level toons, but there’s a minor bug that’s annoyed me for a while that has continued to the pre-patch.

Touch of the Void, in 8.x, always showed up in AMR as a max-ilvl item for whatever rank you unlocked it at. So, when leveling, AMR would always use that trinket, because it always saw a huge amount of Versatility, even though in-game it was still vastly lower than it was.

Now, in 9.0, the opposite has happened. It now reads as 0 Versatility with an ilvl of 1.

Again, not a huge thing, but just kinda weird. Thanks for coming to my TED talk.

In theory it should scale to whatever it is in-game based on the bonus IDs attached to it. If you paste your addon export string that you are copying from the game to the website here, I can try it out. Also, if you could let me know what ilvl and how much versatility it shows in-game.

See below for the string.

When I load that export, there are no bonus IDs provided by Blizzard for Touch of the Void… it seems that item must use the old-school approach for scaling heirlooms that doesn’t involve bonus IDs… I wonder if that’s an oversite on Blizzard’s part or if they intentionally wanted to use a different approach for certain heirlooms… who knows. I might be able to put in code to scale such items… fall back to the old way if no information is provided for the new way, but not sure.

The sources that we use for item data don’t have the required level information on those weapons – hopefully it will show up in later builds, in which case it will get updated automatically. For now you can use the exclusion feature to prevent the optimizer from picking them.

As for the heirlooms not staying locked… that is a side effect of a change that we made to improve a few issues that existed in BfA and earlier due to the wild inconsistency in Blizzard’s bonus ID information. Unfortunately the side effect of that is when the item level changes on an item, we see it as a different item, so then the lock gets cleared. I’ll see if we can put something in for that… but such cases are pretty rare outside of heirlooms, so we rarely see it come into play for max-level characters.

Yeah, item levels seem to be all over the place right now. Seeing a lot of inconsistencies between the ilvl AMR thinks my gear is and what it actually is in game. Just dinged lvl 40 a little bit ago. I did an export of the in-game data, had AMR do it’s thing, and imported the optimized loadout in-game. The screenshot shows my currently equipped gear vs. what AMR thinks I should have.

Again, I totally get that AMR isn’t about leveling, but maybe something about those bonus IDs is throwing things off? 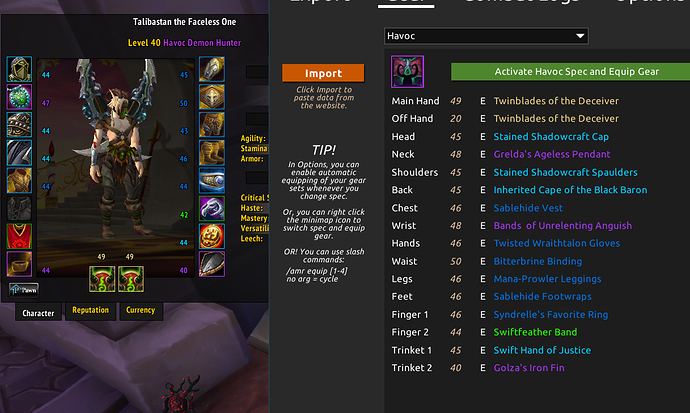 Are the item levels on the website matching up to what you see in-game?

What it shows in the addon might not match up because it is annoyingly difficult to create an item link and generate the proper item level for display in-game.

As long as the website shows the right item level, it will optimize properly.

The ilevels are not matching.

Could you give me an export from the in-game addon for that character?

Also – make sure to visit your bank and activate each spec at least once on your characters after the patch and before exporting, otherwise the item levels might not match.

For example: I’ve got the heirloom leather hat at rank 2, which means it maxes out at player lvl 39 / item level 44. When i import the string into the site, AMR sees it as item level 48, and does not recognize the upgrade rank.

Happening to a couple non-heirloom items as well. I have a green lvl 42 ring, but AMR sees it as an ilvl 47.

EDIT: Dinged 44. Noticing now that when I import a new string, AMR is increasing the ilvl of my heirloom and some of the quest gear I’ve got to match my player level’s relative item level. For example, that green ring above is still ilvl 42, but AMR now sees it as an ilvl 50. Same with the heirlooms and a few others.