Why this essence choice?

Why doesn’t BiB recommend swapping out Unbound Force for Crucible of Flame? When I click on the essence, it says Crucible is a +1.05% increase.

To register/set off any change of optimisation to Essences, you have to pick the Major Essence here first: 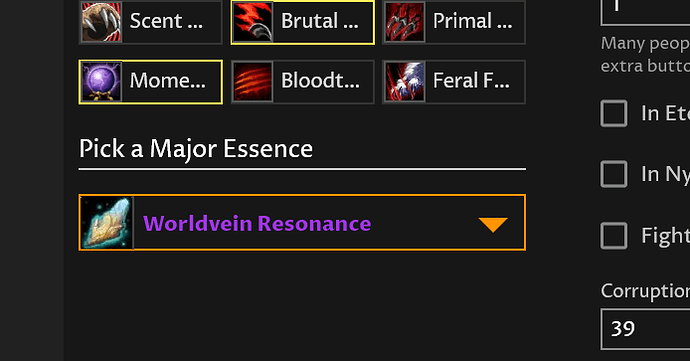 Only then can AMR choose what others to replace the minors with.

A better help scenario for other to assist you is to generate a snapshot of your character via this Help button:

Anyway, I have my major essence set, as you showed. It has stayed as Worldvein for most of 8.3, but I did tinker with it recently. WV is what my neck is using and is what shows in the setup screen. All appears normal, like I’ve done multiple times every week.

Back to BiB setup, click the Major Essence dropdown and re-select what already appears to be selected, Worldvein Resonance. Same results, Unbound Force is the third minor essence but Crucible of Flame is listed as a +1.05% upgrade.

Change to Purification Protocol, now the essences are highlighted in green, indicating something should change. However, the three minors are the three already equipped: Lucid, Breath, Unbound Force. So that is strange.

Change the major essence selection back to WV and the results are like before with the essences not highlighted to change and left at the current selection of lucid, breath and unbound force.

Oh, interesting final test. I changed the major essence to Unbound Force, to force it out of the minor slot, and the minor slot is left empty!

AMR was recommending minor essence changes for me last week so I’m not sure what is happening now.

Try clearing your browser cache - this looks like it could be some sort of display error.

The snapshot code is pretty new - it helps us give support because it gives us all your gear you imported like the string, but also every setting that you have set so we don’t have to guess to see what you see.

Swol, does that mean my information “works” for you and recommends replacing Unbound Force?

I followed instructions to clear my cache in Firefox (just the cache), then restarted it but I get the same results. I also tried from chrome and slimjet browsers, also got the same result.

I tried this out – there’s a case here where the optimizer seems to get stuck on a particular combo of minor essences instead of trying others. I’ll fix that in the next update.

On top of what’s been posted by better qualified people than myself, I get this as primary BiB from the snapshot ID provided:

FTR, the Major Essence isn’t a recommendation that BiB can make for you, you have to make that choice, yourself.

Yeah – the issue here is that it should be picking a different minor essence that clearly scores better.

I was working on some bigger updates to the infrastructure of our servers – finishing up testing that today and this weekend. I’ll roll out several smaller bug fixes like this one with that update in a couple days.