Hi team @ AMR. Thanks for getting this out so fast.

RE choosing between tanking strategy,

all defence recommends more armour and defensive trinkets. all good.

But the all defense setting likes to gem for agility and more damage-focused items where possible for example in a blue gem it will prefer to use sovereign gems (STR and STAM) instead of pure stam. The reason I bring this up is the “Accepted Wisdom” from the druid discord is that stam is king. example: Bear Phase 1 Raid BiS - Boss Tanking - Nerd80 - Eighty Upgrades

I put “Accepted wisdom” in quotes because ofc AMR has its own opinion on what’s best and fair enough. I would be interested to hear what causes the discrepancy though.

Is there a way to slide the gearing strategy even further to toughness and prefer stamina higher?

Thanks for your time. Hoping this came off well I’m a big fan of the tool, not trying to trash your gearing strategies.

After adding in raid buffs/consumes/playing around it appears to be preferring stam gems in places it wasn’t before: 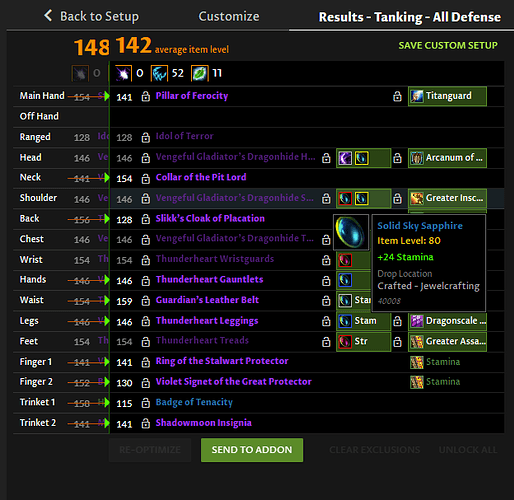 Would still love to hear more about the toughness gearing strategy though if you can. This seems to have changed from TBC, are you expecting the increased emphasis on stamina that I was expected (a nd looks like its doing).

Thanks again, appreciate your work.

Check out this thread for updates:

Today we released the first version of the Wrath of the Lich King optimizer! It really needs about another week of polish to be complete, but we figured people would prefer that we release what we have so they can use it while leveling up. Optimizer Status The optimizer will return reasonable results for all specs, but we are still working on ranking many of the special effects, in particular most set bonuses, idols, librams, etc., and trinkets with fancier effects still need attention. In a…

Most specs still need significant tuning to the gearing strategies. We expect guardian druids to be updated sometime later today.

Can you give me an example case? There are two stats that we use behind the scenes, armor found on e.g. trinkets is considered “bonus armor” which does not get multiplied by any of the bear form bonuses like “regular” armor does.

My Violet Signet of the Great Protector is being recommended above all my other ring choices, and in the char sheet column it’s showing too large an increase in armor for equipping it.

Edit: similar for Badge of Tenacity which is a trinket.

Could you provide me a snapshot to test your case? Press the “help” link next to the big Best in Bags section header, then Create Support Post, and copy the generated snapshot ID here.

You can also see this in the Upgrade Finder recommendations: the top few items from N+H dungeons have extra armor but are weapons, jewelry, trinkets, etc.

I’ll take a look, I had forgotten that armor multipliers for bear talents require special code… it took a few more expansions for Blizzard to figure that one out!