The only other simulator tool for Wrath will be Rawr. You can try downloading a version for Wrath and comparing it to your results.

I’d like to add another example of the optimizer recommending a shoulder enchant that doesn’t appear to exist in the game. For my prot warrior, I’m being recommended Inscription of Kings, which based on what I can see, doesn’t not exist. Might be a scrub from Wowhead as was previously noted:

I haven’t yet done the log comparison you’ve suggested, but that’s a good idea and one I will look into. Here is a link to our most recent clear Warcraft Logs - Combat Analysis for Warcraft (note, patch and sarth ended up having to tank)

Thanks for the info, I’ll take a look when I get a chance.

Those simulations are within ~1.3% of each other… that is pretty damn close for two completely independent models, and well within any range that I would consider “too close to verify” with in-game testing.

I’ll check out the log to make sure that the simulator is getting a similar damage profile to your in-game experience, and same with our optimization model.

Having written many simulators from scratch for multiple games over the years… I can tell you that the number of assumptions and “fuzz” you have to build into a simulator to get a result is way more than people think. I know that a lot of people have been trained that a 1.5% difference from a simulator is a “big deal”… but it just isn’t. That is way below any realistic threshold of any simulator’s true predictive power.

Real fights have a lot of variables that are just too difficult and time consuming for most simulators… like movement, your team’s general strategy on a fight, etc. All of these things will cause your in-game fights to deviate significantly from the simulation, thus making small predicted differences between point simulations of dubious value. Simulation is best used in bulk to drive large-scale statistical models.

All of that said! If armor pen builds are really popular with Arms warriors and they are predicted to be this close in value to crit builds… it won’t really matter which you choose, so we can nudge the optimization model to favor the more popular build.

Also in your snapshot from our website, you have no raid buffs, debuffs, or consumables selected… what happens if you change those to match what you have chosen in the simulator?

Thanks for the input, and yeah I take all simulations with a grain of salt as the sim outputs something extremely specific that incorporate a ton of assumptions and actual in-game activity is a lot more dynamic. It’s a pain when anyone asks a question in the class discords and the communal response is “sim it” rather than putting any thought into discussion.

I re-ran the AMR optimizer with all buffs selected, and I got a slightly different strategy with a higher emphasis on strength. Still showing a -17% ArP delta over the sim-optimized set. I’m not enough of an expert to weigh in on which strategy is “correct.”

My only objective input on the tool is that having more dials to turn and control the optimizer would be both interesting and useful. I imagine doing that is complex for a number of reasons.

Thanks again for taking the time to hash through this stuff–appreciate the discouse.

Out of curiosity, how does the setup with more strength simulate in that tool vs. the other sets?

odd names in BiB vs info pasted into ingame 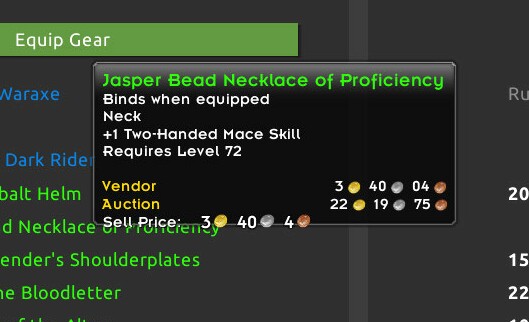 Verdungo’s Barbarian Cord does not have a prismatic socket.
https://www.wowhead.com/wotlk/item=40688/verdungos-barbarian-cord

WotLK: belts can have an extra prismatic socket with a belt buckle Tutorials

Ask Mr. Robot is showing an extra socket on [insert my favorite belt slot item here]! It does not have this socket in-game! … but it COULD! We show an extra prismatic socket on most belts for WotLK. You can buy a belt buckle from a blacksmith or the auction house to add this extra socket. Sometimes you might not want the added expense on lower level gear. Set the Belt Buckle Min Item Level setting to the lowest item level item to which you want to add a belt buckle.

Wouldn’t it be cool if you could get that much though?

We’ll fix that in the next update, it is a display-only issue and is not impacting the optimization.

Thanks for the quick fix ! I still find it strange that crit sims so low in all the simulators. A low amount of crit can lead to a really bad streak without an eclipse proc.

On a another topic, is there a way to select Archavon loot in the Upgrade Finder ? I’m in a 10 man guild that does Archavon 25, and it would be nice very nice to be able to incorporate that in my possible upgrades.