Guys, can someone, please, take a look at this and explain it to me? And also please confirm that we are absolutely certain about all this? This is supposed to be all math, after all, and my query also has to do with my vault rewards; something that I wait a whole week for, and sometimes the only way I’m ever going to get an iLvl 252 trinket or the like.

P.S. I’m aware that Pawn strings are not always dependable and there’s never a fixed stat priority order but the Upgrade Finder is clearly following this stat priority now, and it goes against every Guardian guide out there, maybe except AMR’s guide.

The potential amount of waste of time being at risk here is genuinely stressing me out, because even though this is just a game, it’s also a major time sink that Blizzard has intentionally designed to leech on people’s time with repetitive & mind-numbing farming activities if they want to beat the RNG cancer and achieve their gearing/raiding goals. So, this is not just about the game; this is about my most important resource in life, time, and I really don’t want to waste that much of it by making such potentially drastic wrong decisions while trusting potentially flawed math or flawed ways of using infallible math.

Please help me out here; I’m also traveling, and would really like to get my vault weekly done today, so my query is rather urgent.

The potential amount of waste of time being at risk here is genuinely stressing me out, because even though this is just a game, it’s also a major time sink that Blizzard has intentionally designed to leech on people’s time with repetitive & mind-numbing farming activities if they want to beat the RNG cancer and achieve their gearing/raiding goals. So, this is not just about the game; this is about my most important resource in life, time, and I really don’t want to waste that much of it by making such potentially drastic wrong decisions while trusting potentially flawed math or flawed ways of using infallible math.

This sounds to me like a variant of “the game playing the player” rather than the other way round… and doesn’t sound like fun.
My honest evaluation/impression is that something outside of WoW is more deserving of your time, at the moment… it makes sense, to me, that devoting your time to whatever else requires your time be a priority over WoW & that you’d be better served coming back to the game when you have less pressing commitment.

As far as any query over in-game items & upgrades go, I’ll defer to others who are more knowledgeable for that input.

Most importantly; take some time for you… people are no good to anyone if they’re ‘a spent force’.

I appreciate your advice, eighjan. There’s familiar and sensible wisdom in it. And yes, it is very akin to “the game playing the player.” Isn’t that part of the very spirit of World of Warcraft’s design philosophy today? You can see it all over the design principles of the end-game. The game is clearly being developed and designed to keep players chasing imaginary carrots, while depending on an RNG system that seems to have free reign to achieve pure chaos and wild randomness. “Maybe you’ll get ‘lucky’ … one day … maybe not. Maybe you’ll be rewarded sensibly for your efforts & time invested in the game … maybe not. Who knows? It’s all up in the air, up to sheer random chance.” And supposedly, “That makes the game unpredictable and oh-so-interesting. Would you want a boring predictable reward system? Come on.”

Actually, I would, yes.

For the past 3 weeks, I ran Plagueful M12 to M16 no less than 26 times for the stamina trinket upgrade that my character needs the most nowadays, and until last night, I still haven’t gotten it either from the Challenger’s Chest or the “Great” Vault which, according to the now ridiculous lore, rewards based on the “Purpose.” Blizzard loves to troll its players, and now it’s trolling us even in the very lore, calling chaos, injustice, and pure randomness … the “Purpose,” and putting NPCs in their game who revere and worship said “Purpose.”

Proof of my Plaguefall marathon for a stamina trinket I never got: 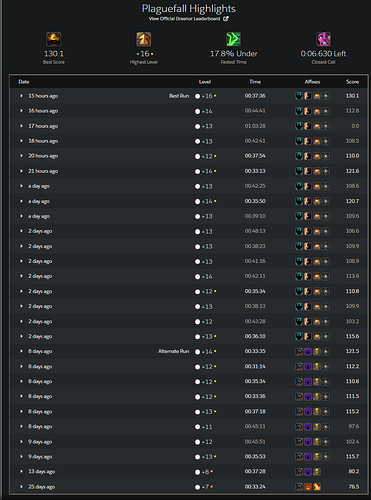 And when I finally got a trinket for my character, I got an iLvl 252 trinket in the vault that AMR calculates to be a 0.07% downgrade as you can see from the screenshot above!

This is all frustrating beyond belief, and I don’t even think taking a break from the game will resolve the issue. I kind of want the escapism, enjoy MMOs, and the MMO market is pathetic enough to not have something better, for me personally, than WoW … as cancerous as it has become. And it’s the slightest bit of consolation that I’m not even alone with some of these sentiments; WoW content creators and veteran players alike are quitting the game left and right, moving either to FF14 or New World or whatever else. The only thing that will resolve this issue is if Blizzard’s executives and decision-makers stop treating us like addicts, slaves, and rats on a treadmill, stop using this cancerous basis as the spirit from which they design the very systems and gear progression of the game, respect our time invested in the game more, and implement systems that reward players fairly — not damned randomly — for their efforts and time invested in the game.

And quitting now would be like quitting on personal goals. I had a goal to raid Mythic Sanctum of Domination for weeks now, and have been doing my damndest to get this character ready for it, but all I have to show for daily farming & grinding is the pathetic character sheet that you see above, largely due to the soul-draining cancerous RNG that decides progression and its speed if you ever progress at all.

This is basically my situation with the game as it stands, man. And believe me, if I achieved my goal of raiding Mythic Sanctum of Domination, even at an 8/10 level already, I would’ve quit the game or taken a break at this point, but I just hate to not finish what I start, so there’s a stubborn driving force within me pushing me through all these soul-draining futile exercises of trying to “win the gear lottery” over and over again. Blizzard, at this point of its immoral, unethical life, thinks that “this is great because it adds more time to our play-time metrics,” and yeah, it probably does … in the short run, but once I’ve achieved a certain bare minimum of the goal that I set for myself, I’ll most probably be completely burnt out from the game and not just take a break, but either quit altogether or take another one-year break from it. I don’t see how that benefits their “metrics” really, but shortsightedness is not the only problem of a bunch of executives driven by little more than sheer greed, arrogance, and contempt for their paying customers.

And thank you for the kind advice. It was a good opportunity to get all my true feelings about World of Warcraft today, its design philosophy, and its state out in the open. And I’m positive that I’m far from alone in some of these sentiments at least.

When you look at the upgrade finder’s suggestions for the great vault, you have to read it with a bit of nuance. We can tell you: If you equip this one item right now, based on your settings, we think this one item will be X% better/worse than the others.

But… that’s just an immediate snapshot. If there is an item you have been trying to get for a long time (like the trinket) and you think it will eventually fit into your desired best in slot set of gear, I’d definitely go ahead and take that regardless. The ranking we give is for people who really aren’t sure what items are good/bad for them - or when comparing items you have no strong feelings about.

Thank you very much for answering my question about this issue, Swol.

And as you can see from the screenshots of my OP, that agility trinket, even though it is iLvl 252, compared to an iLvl 187 critical-strike trinket on my toon now, and in spite of the healing it does, it is actually a -0.07% downgrade according to AMR’s sim of my character! It is truly an insane sim result that I’m seeing here, and I want to understand a bit more why that is. How can stamina be valued so much higher than agility this way?!

And this goes all the way up to BiS, not just for now. I barely understand that for now, maybe the critical I’m getting from the i187 trinket is better than the healing & agility I’m getting from the i252 trinket, and the stamina this much over agility at the BiS level is confusing me even more.

If you post a snapshot, I can give you a better answer. It’s hard to tell just from a screenshot.

Instructions for making a snapshot:

Thank you for letting me know about the snapshot thing, Swol. I wasn’t familiar with it but now I know.

Here’s the snapshot code I got:

We don’t give very much value to the shadowgrasp totem’s healing effect for tanks. So when you are using a “mostly TUF” gearing strategy, that is effectively a DPS trinket effect that has almost no value defensively.

Stamina is a good defensive stat, so I’m not surprised that some stamina trinkets show up in a mostly toughness set of gear. The effect on that trinket from tazavesh has an absorption effect on it too - and absorbs are generally some of the best effects for tankiness.

Blizzard does not design very balanced tanking trinkets/effects, so it’s not too surprising to see the recommendations all over the place with respect to item level.

Thank you for explaining this, Swol.

One specific part that’s really confusing me is how and why the iLvl 187 Critical Strike trinket is better than the iLvl 252 Agility trinket with the healing effect on it. I mean, I can understand how stamina can be valued greatly, especially if I rely on self-heals that are percentage-based, rather than capped at a specific HP, but Critical Strike being that much better than Agility (which contributes to a Guardian’s Dodge), to the degree where an i252 agility trinket is 0.07% worse than an i187 critical strike trinket, is just mind-boggling for me. This is the part that’s really confusing me hard.

Half the budget of a trinket comes from the effect. Primary stats are pretty weak for toughness. Combine that and that 252 trinket is really more like half a trinket being compared to a “whole” 187 trinket.