Last night’s update added a feature to help you decide when to cleanse a corrupted item. It is part of the Upgrade Finder: 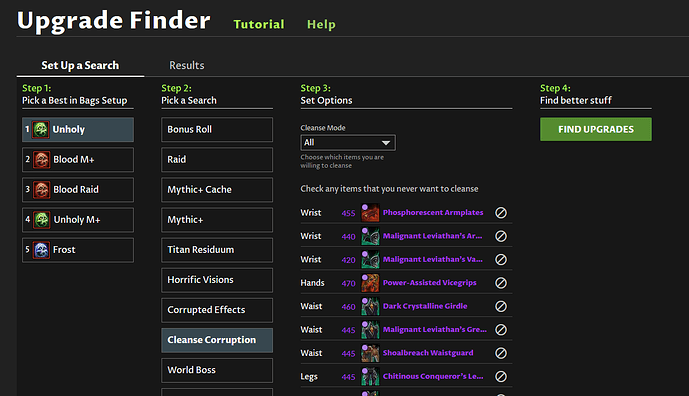 It works by adding cleansed versions of your corrupted items to your inventory, then running Best in Bags again, and seeing if your score increases. You can control which items will be cleansed with two settings shown in Step 3 in the screeenshot:

You can manually tell us that you never want to cleanse certain corrupted items. Works very similarly to the exclusion list on Worst in Bags.

Once you press Find Upgrades, you’ll see a result like this: 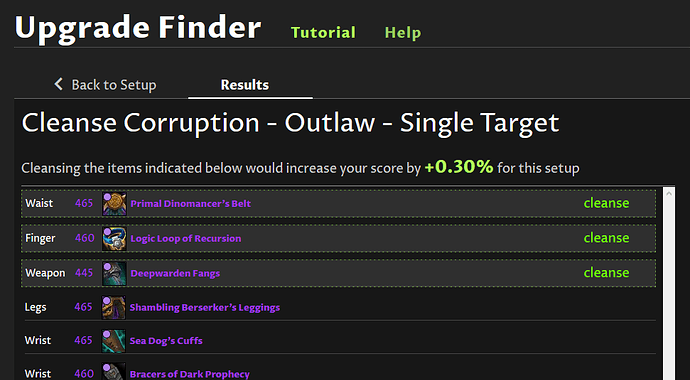 image971×536 57.7 KB
This is telling us that if the 3 highlighted items were cleansed, the score for this user’s Outlaw - Single Target setup would increase by 0.3%.

Below the message is a list of all of your corrupted gear for reference, with an indication of whether to cleanse it or do nothing to it. The list will also indicate if an item was not considered because it is in use by another setup as per your settings.

It is not easy to decide whether to cleanse something, especially once you consider multiple setups at once. This tool is meant to give you enough information to make a choice – it does not factor in every possible consideration though. We tried to strike a balance between usability and flexibility.

Using the example result above, the person might say… “eh, for only 0.3% of an upgrade, probably not worth cleansing those… I’ll hold on to them just in case they end up worth using later.” That is a very reasonable thing to say! Use the information that this tool gives you to make your own judgment call – there is no right or wrong answer.

Why isn’t this listed in the patch notes in the actual MR. Robot app? I never noticed the new button in the list for Upgrades just stumbled upon this forum post by accident today.

[edit]
Ok looks like this literally got fixed 10 seconds ago. Thanks