We released a beta version of the simulator today and all three priest specs are fully functional including all Covenants, Conduits, and Legendary Effects.

!!!
The rotations are not complete. And in case you were wondering, no, the rotations are not complete. This beta version is not sufficient for you to make detailed comparisons between covenants, conduits, and legendary effects. You can get a rough idea, but you will want to optimize the rotation more to get better comparisons. I will, of course, be doing my own round of rotation optimizations - but I will be doing that after all classes and specs are functioning in the simulator.
!!!

For now, healers are using the same scripts we have been using in BfA. We do not plan to keep using those scripts as-is for gear optimization in Shadowlands. We may use them for initial gearing strategies at launch - but we will be quickly developing a new set of scripts for healer optimization. I will also be adding a pure DPS rotation for each healer spec, as we will be supporting a “slider” like we do for tanks that lets you balance how much you care about gearing for damage vs healing.

Feel free to post any thoughts/ideas you have in this thread!

Elemental and Enhance have gone through a lot of changes on beta. Restoration has remained largely unchanged, but it does feel a bit more powerful with some numbers tweaks they have made.

Enhancement is now using maelstrom weapon again. In general, this change feels good to me - building up charges to empower spells that normally have a cast time is pretty cool. The main disappointment so far is that the damage of lightning bolt and chain lightning haven’t been tuned up enough to make the maelstrom payoff feel good. Right now I’m just hoping/imagining that they will increase that damage. Get ready for all your friends who play melee specs to beg for you to be in their group - Windfury Totem is back and it only affects your party (it’s not a raid-wide buff).

Elemental had fulmination added back in, and then it became a lot like maelstrom… so they reverted the change and put maelstrom back in. I don’t know that elemental will feel much different to people, but there are a few changes. Echoing Shock is a new talent that is very fun to play around with. The necrolord covenant (Primoridial Wave) can be very fun if you set it up right - get a few flame shocks out and then see Lava Bursts flying all over! Some fan-favorite effects are back, like Echoes of the Great Sundering.

I’ll add more thoughts as I get into heavy rotation development in the weeks to come!

Hello !
I may take a look at enchancement Shaman because i like it very mutch in BFA, i was hype for it in SL and i think blizzard missed some things; as you said dmg from lightning bolt and chain lightning isn’t great, yet.

ALL OF THE COMMENT AFTER THIS POINT ARE FOR SINGLE TARGET ONLY, i will see multi target later

One error occure if i tried to put “Weapon enchant” into the rotation. From my point of view, explicite them sound better ? Specially if you accept the lightning shield but not weapon enchant. 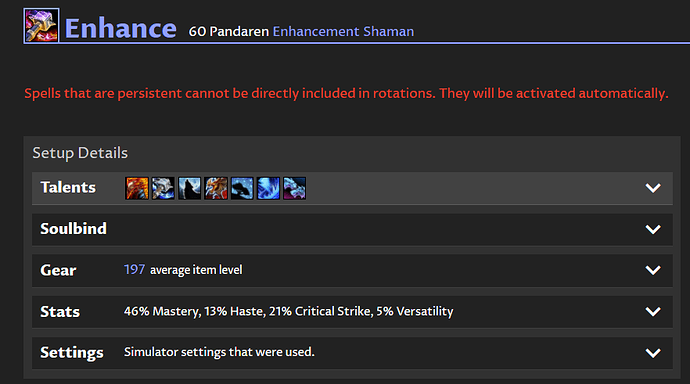 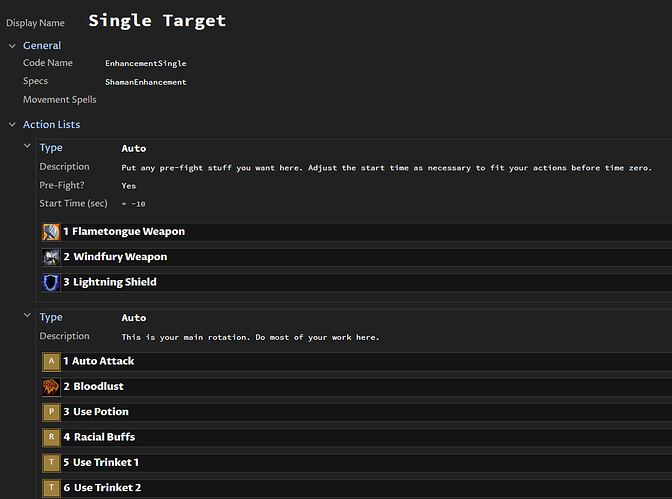 image1115×829 44.7 KB
this is a vierge rotation with only those 3 spells
Same if i add the “windfury totem”, except this one need to be cast every 2 min and cost a gcd so it have to be into the rotation at some point.

The rotation : https://beta.askmrrobot.com/wow/theory/rotation/ddcacac8feec416ab21d7667cbe38e21?spec=ShamanEnhancement&version=live&share=true
Disclamer : Tried with only 1 set of talent where i had lots of downtime

Small modification on the AMR rotation :
Default AMR Rotation with Crash Lightning at the end

I have those two simulation :
Same rotation as Lashing Flames improvement
Base rotation
So here i dont think the use of “2” more stormstrike that change things here. But the use of crash lightning in single target is probably the most improvement here.

Gonna eat ! So be back soon

This part is Done
After adding the Crash lightning into the AMR rotation i’m now trying to dig the point below to improve the current rotation :

The differences in these simulations is mainly from making use of crashing storm. The flame shock refresh has no impact really, just FYI. It already has 96%+ uptime with default rotation.

I’m trying to finish the few point i have on the todo list above.
I’m having trouble to make Sundering work.
Without condition or anythings, having sundering in the rotation just wont work.
Can you help ?

I guess it has to do with the “is a coldown saved for aoe” but with this part in the rotation, the spell isn’t used when i want it what ever position i’m putting it in the list it just lunch when he want.

If you expand the “metadata” for your Sundering action, you will see that there is a tag for “Boss Modes”. You have chosen AoE. That will make this action be ignored for any script that does not have a section flagged as AoE.

Those metadata tags are not necessary for your own rotation development, although you can make use of them instead of having conditions like HasTalent(X) or HasConduit(Y), etc. The main function of the metadata tags is to make the rotation display correctly in the rotation viewer on the guide pages.

Thanks !
I was able to do the test i was looking for; not an improvement sadly :’(

Now that i have “finish” my pass on the rotation.
I’m gonna focus on legendary and how to optimize them into the rotation.

As a default; here is the rotation i’m gonna use (result of the rechearch above).
https://beta.askmrrobot.com/wow/theory/rotation/03894454e4774106aeac86e76ce468d3?spec=ShamanEnhancement&version=live&share=true

To summarize:
Here is the rotation taking all modification from top to finish (from talent to Legendary)
https://beta.askmrrobot.com/wow/theory/rotation/1ff819b04b7643d6a15ac3e10d0c5577?spec=ShamanEnhancement&version=live&share=true

Hoy !
So i was looking some videos :

He is speaking about a combo using an elemental legendary the pants “Footpads of Elementa Equilibirum” wich could be very good for enhancement.
The buff isn’t consumed for everythings apprently.

From my last testing Elemental Bast was already very close to be a good talent of maybe the best. with this legendary it could be the best overall. I’ve reported to blizzard about this legendary or make it general or make it so it doesn’t work at all for enhancement.

@Swol if you come back to this spec at some point, can you allow the legendary to be picked for enhancement ?

Yeah I will make sure you can equip it in the simulator - I’ll probably have to implement it first.

I’m guessing it is not intended to behave like this… we’ll see where it ends up down the line.

In just a few days I’ll be done with my first pass of each spec and then be swinging back around to work on the rotations for the ones that need it. Enhance certainly needs it

I really like the burst combo you can do on enhance with stormkeeper and primordial wave, I think I put that into the rotation just to mess around with it.

Yeah this legendary doesn’t seems intended that why i’ve reported it to blizzard ingame so they make it totally usable or just not at all.

Great job for doing all the specs in few time ! xD

The gameplay from Stormkeeper is interesting but very difficult to use in multi target, i would like somethings to spread flame shock easly

Hi !
I’ve update this WA group with the rotation i’m speaking about in this in case you want to look at it.
https://wago.io/Bkofw8j4Q

It’s a good way to see their is a problem with some abilities. Not everythings works perfectly (haven’t tried necrolord or even fire nova)

I posted an updated rotation for enhance. I don’t have time to answer your posts point by point, but try out the new one - I think I hit all the areas you talked about.

For using the Doom Winds legendary - use the Doom Winds spell in simulator - Windfury Totem is reserved for the raid buff. I can probably put the weapon imbues in the rotation at the start without being a problem, but haven’t done it yet.

I’m really happy with all you did ! Way cleaner than my work but hey i tried at least ! I hope the work i did was usefull and allow you to go faster on this spec.

In the next update I’ll have a version that includes Chain Heal as a useable spell for all shaman specs. I tried putting it in the rotation with the legendary, but it didn’t increase DPS. I think it would only have utility if your group actually needed the heals.

Your posts were interesting and helpful - anytime you want to poke holes in my rotations, I welcome it!

After playing on some MM+ key on the beta, i wanted to share my point of view
I feel like their is somethings that i’m missing on the rotation or how i execute it because sometimes i’m very low compare to other player. In Single target seems fine, not top dps but fine.
In Multitarget, i’m often consumming Maelstrom stacks only to get a hailstorm buff faster. It’s result into more FrostShock are showed below.

Their is a difference between the simulator for MM+ and an overall spellbreakdown from details on the beta. My hypothesis is it’s due to the script most likely and the number of target (dmg per hit are really close).
I’m looking specially at Frost Shock beeing really high in the beta where it’s not in the simulator. Most of the pulls where 4+ on this dj sometimes even 6 or 7.

Can i have your point of view on this ?

This is the spell breakdown after a MM+: 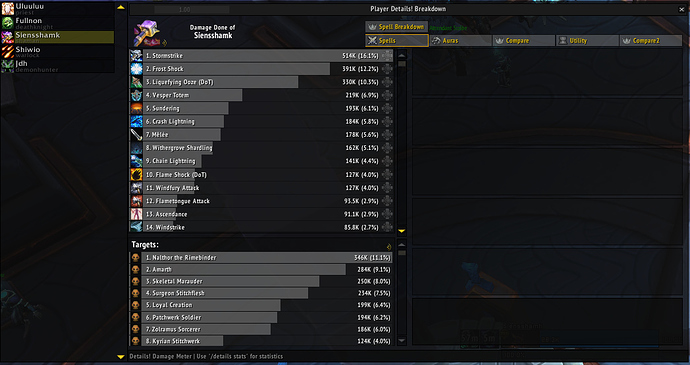 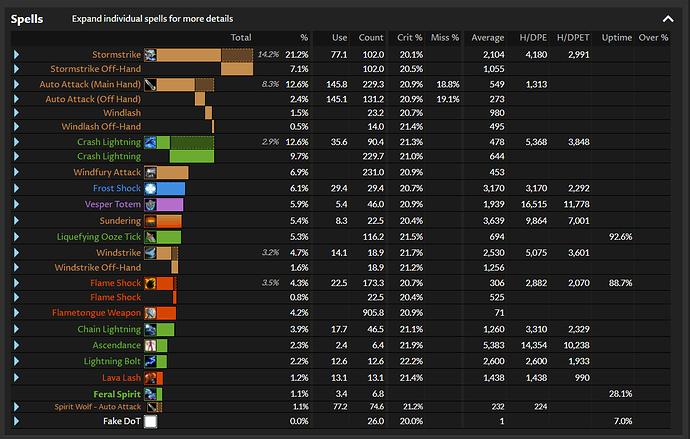 We’ve been doing some work on the targeting code - looks like the hailstorm talent got a little messed up as a result and it isn’t hitting multiple targets. We’ll post a fix for it in the next update.

long story short :
If you use stormkeeper, and have stacks of maelstrom weapon. Currently using lightning bolt or chain lightning doesn’t use the maelstrom stacks and the lightning bolt is buff by them. Maybe it’s a bug maybe not.

I don’t think it is a bug (this is part of why I’ve been saying that I think this talent is over-looked right now).

If it used up maelstrom, it would not get full benefit since stormkeeper already makes lightning bolt instant cast. I think it does not consume the charges by design.

P.S: after using it in dj it not that difficult but it showed me that my WA rotation is broken let’s fix this

After fixing my Weak Aura and now i’m doing a mutch more smooth rotation with hailstorm and Storm keeper It is very nice !! You did a great job Swol once again !