A) I do not understand where the numbers are coming from, meaning, is it minus our base and only over or is it the whole number?
B) Is it possible to use percentages instead of stat numbers? I know what % I need for crit on my frost mage, but 0 clue what the stat number would be. Any guide or other types of site (i.e. wow.com) uses percentages, not the actual stat number.

A: I need more context to respond to this. Which number are you referring to, there are lots of numbers on the site!

B: We show % on the character sheet display to the right of the gear table. In the customize section we only use ratings. That ends up being a much cleaner way to optimize gear, even if it is a little harder to pick an exact % goal.

One reason this is ok, in our opinion, is because there is no exact % that you need to care about in WoW. You brought up frost mage as an example. There is a point at which you will crit 100% of the time against frozen targets… but that is not necessarily a point you actually want to reach. That is the point at which crit becomes less valuable. Getting right up to that amount of crit only makes sense if crit remains better than the other stats all the way up to the “cap” - which might not be the case, depending on your gear.

Our default gearing strategy takes this into account very well, btw. If the default strategy isn’t bringing your gear up close to that “crit cap” - that’s because you don’t need to be there for optimal DPS.

As for other specs that want certain amounts of stats - it is never an exact amount that matters - it’s just being around some value. Like close to 20% haste. There is always fuzz in these types of things. 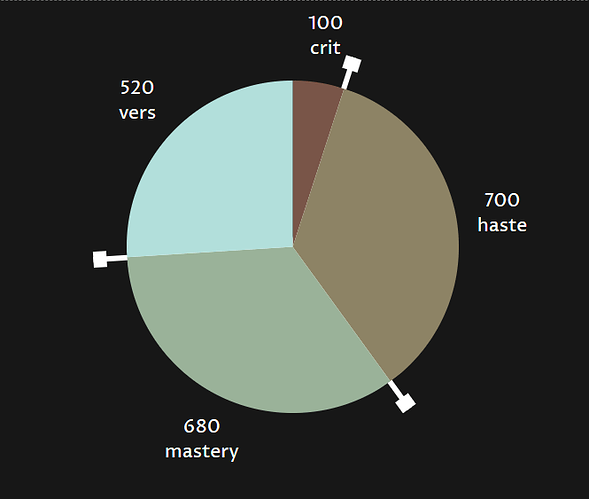 I know there is “fuzzy” area around the percentage, but specifying a target percent rather than a meaningless number to a layman like myself is like throwing darts at a dart board with my eyes closed. The wow interface uses on the character screen uses percents, you have to hover to see a number. worldofwarcraft.com uses percents when looking up characters, wowhead guides refer to the percent. I have not seen any guide or video that says you need 1352 crit or whatever. 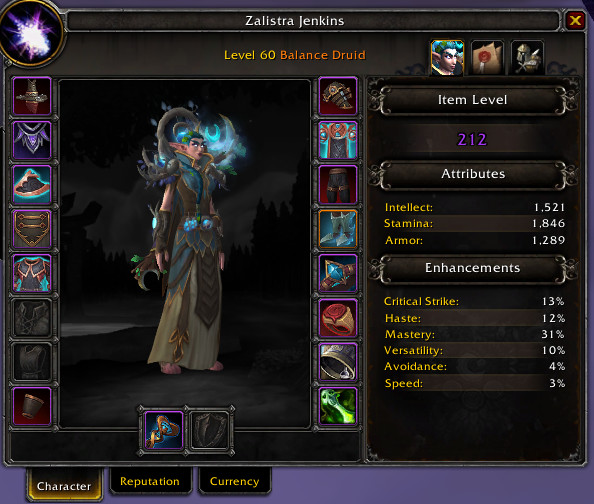 In our experience it’s a toss-up how people want to think about secondary stats: ratings or percents. Popularity of one or the other tends to wax and wane with the years.

Ultimately, the specific amount isn’t a big deal – it’s the ratio that matters the most. Someone with 1000 rating to allocate or 2000 rating to allocate will usually want a similar ratio. A lot of people mistakenly think that they need very specific percentages, e.g. get me to 20% crit before doing anything else, then suddenly switch to haste or mastery. That is rarely optimal – usually a good balance of crit and haste performs better, with less of both at lower gear levels, and more of both at higher gear levels.

2000 is a nice easy number to divide among 4 stats, and is close to the amount you’ll have on gear around the item levels most people will have.

Disagree, using your own simulator, when I specify my stats I can get double digit return on my DPS over your balanced stat default. When I get my stats closer to the research I do on wowhead, bloodmallet and warcraftlogs, I can push that number higher. So, having a percent goal is very effective, not making it a hard line to hit, but does make a significant difference (if you need examples, I can do sims using your system, but will be difficult to publish the screen shots only being able to do one per post). Thank you.

Just giving an option to go percent or by the number would help non-mathematical people like myself more easily make sense of what I am shooting for in my secondary stats. I understand if just saying you have 4000 points to split, because it is easier to code, is valid. But, that number is meaningless to a large portion of the people that use your site (not based on science, but the complaints I get for guild mates and myself, so it is anecdotal.) If you say that the larger portion of your base understands and is more comfortable with your current system, the please let me know the best way to meet my way of gearing using that system.

We used to have a system where you could specify percentages you wanted. But that let to a lot of questions: is that % on gear? % on character sheet? After buffs, before buffs - which buffs should count in it? Etc. And then, people wanted to specify ratios of stats, since that is usually more optimal, as yellowfive mentioned. Ultimately, we ended up changing it to using ratings, since that is unambiguous. You might have to fiddle around with it if you are going for certain percentages, but it doesn’t take a lot of effort.

In the past, people specifically asked us to change it to use ratings

So, you can understand our hesitancy to change it back.

Also, if you have examples where running a custom stat ratio results in 10% or higher DPS gains compared to our default build, you should give us that example to look at – that is quite large and I’d like to see what is going on.

Also, you can just copy the link to simulation reports, you don’t need to post screenshots. You can also give us snapshots to your exact settings used in the optimizer to look at your case, directions here:

This simulation is the AMR default BiB solution: 5,517 DPS

You are actually reducing your simulated DPS by using the customizations. The optimizer is doing what it is designed to do, which is to maximize the simulated DPS. In all of these cases, you would be best served by sticking with the default gearing strategy.

I think you might have been solely looking at the +% gain score on the optimizer, which can get a little ambiguous when using custom gearing strategies.

Without running a number simulation, that is what people go with. If that percentage is wrong, then when best in bags is ran, the DPS should be stated next to the percent or something. I can guarantee you that people do not do a best in bags then run a simulation each and every time. Logically for the layman is that the DPS % is higher, so I will do more DPS. Sounds like something that needs to be looked into.

That results in a very ambiguous situation with regards to how we should “score” that solution. It will always do less DPS according to the simulator. So, we try to come up with a score based on your customizations that shows you how “better” the new gear is according to what you are trying to do. If you say: I want all haste and we get you a bunch more haste, we think that must be a lot better according to your customization.