For some reason, after I flagged Imp Faerie Fire, AMR goes way above Hit Cap even though I have a piece or two with more AP/Agi. It also suggests Hit Rating Gems, which makes no sense. 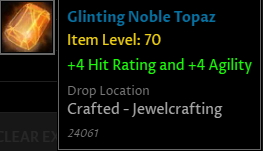 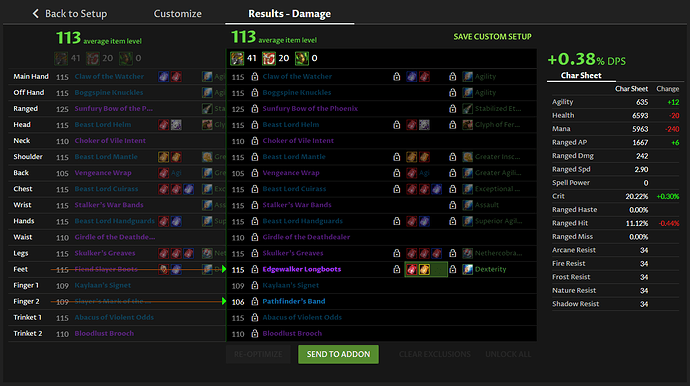 When I load this snapshot and turn on improved faerie fire, I’m seeing 9.98% ranged hit, which is a bit over, but it is hard for you to stay under the hit cap with the items available to you. I’m seeing the Stormreaver Warblades being picked as your offhand weapon.

Thing is, I was being suggested Boggspine instead of Stormreaver and also Hit Gems instead of pure Agi ones. I had to manually filter them out to increase Agi and decrease hit. That is with Imp Faerie Fire on.

Edit: I deleted one of the Setups and created it again. Now it is suggesting Stormreaver, however, I still see Hit Gem being suggested when the Bonus from the boots is Hit.

Edit2: Playing around with it, does AMR make the first setup option its main one and try to work around it without changing too many gems? What I could see is that if I add Imp Faerie Fire to the first one, it will prio Agi Gems, but the second one is pretty much tied to the first’s setup gems.

Yes, the order matters. The first setup in the list has no restrictions on gems/enchants. The next setup can use the same items as the first setup, but it can’t change any already-chosen gem or enchant. And so on.

This is one of the most popular features of the optimizer – it lets you build multiple sets of gear that you can switch between in-game.