Each time I am importing my char, AMR identifies him as Tank and Cat, activates the DD spec for simulation and suggests DD items. However if I switch over to Tank he fails to see equiped items, suggesting to eqip them. Same for enchats. He suggest enchats that are already present.
How can enforce AMR to evaluate the char as tankand amr to recognize the equiped equipment?
Snapshoot ID:
1eb72ff05f8045e1943b9aba4e606263

We do see your bank items if you open it up while the addon is installed.

Try exporting the results of BiB to the addon. In-game, activate each setup and equip the gear suggested. Re-export to the website and then make some small change to force it to re-calculate (like change a raid buff or something). See if that clears it up for you. It is hard to pick between “feral” and “guardian” in classic because they are really the same spec.

" Error
Guardian could not be exported. Usually choosing that setup and re-optimizing will solve this problem."

Regardless how much I try, same error.
Is there a way to disable feral DD consideration?
Edit I dont think feral is the issue but for some reason is guardian evauation not working andthat is what I am using amr. for.

great, let you know how it goes.

I’m full guardian druid with all tank gear. The TBC website right now currently suggests I trade my earthwarden for shard of the virtuous (healing mace) and my T4 helm for my wolfshead helm, lol. I’ll keep waiting for it to improve.

Also, when is the addon being updated? AMR is the best addon for auto logging raids and thats the main feature I want back.

Hyperlord, please open a seperate bug post, instead of hijacking an ongoing one. Thanks!
The new post should have the import string and a session id so they can reconstruct whats happening. And have a look on the settings and changes in your simulation.

For istance, a Beastmaster friend of mine was suggested to use mp5 gems. Then he saw that he was missing buffs and consumeables like mana potion. Depending how long the calculated fight is going on, the outcome may varry a lot. For 2 minutes fight without amr knowing the actuall buffs and consumables he will use, was the suggestion absolute correct. He just don’t have enough mana.

My point is, double check you settings.

Sorry to say but the isse still exsists. Strangely it didn’t on Sunday morgning.

AMR imports two setups, Guardian and Feral. So far, so good. If I look on best in Bag for Guardian I see this. 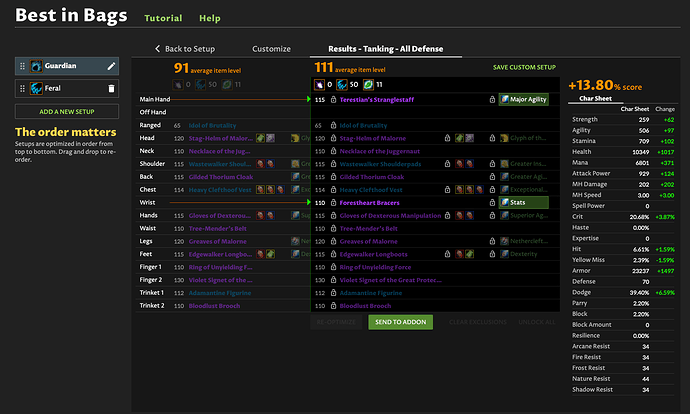 While on Feral seems everything ok: 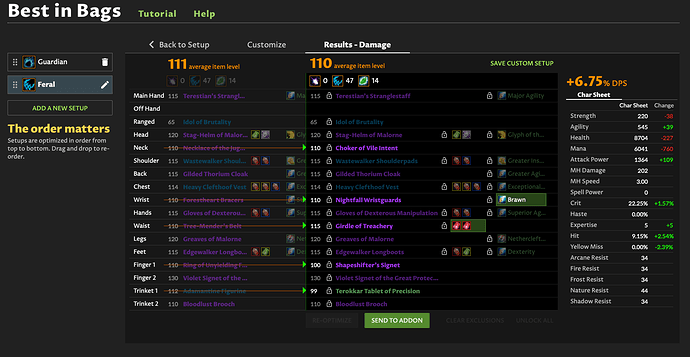 We’ll look into why the optimizer isn’t detecting an equipped weapon for Guardian.

I am able to do an optimization and export it back to the addon for Guardian. Can you explain what you mean when you say you can’t get a result for Guardian?

That was badly formulated, sorry. English is not native for me.

What I meant is, that I can’t play around with different settings for gems, buffs or consumables to see the changes on the character sheet.
Speaking about the missing weapon for Guardian. It is not just the weapon. He doesn’t see the wrist slot as well.

I think the usability issue will be fine if AMR recognize the missing items, knows what items are equipped.

Wow, the results are getting stranger. 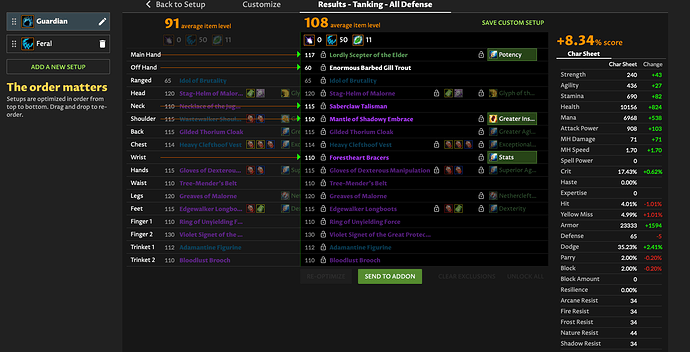 Hijack? I was agreeing with you and giving another example of what you were finding, geesh.

I don’t even know how that is possible - we’re working on it.

Roger.
Btw, it affects feral spec too now. And it happens on different computers. Im using a mac book pro and tried it on my ipad pro. Same result

Tested Windows 10, macOS 11, iPadOS 15 with Safari, Firefox and Edge. It happens everywhere.
I am giving up on this.

Goting to wait a 1-2 deays before I am going to decide how to deal with this.

Any news here? Can you reproduce the issue?

I can reproduce the issue of the guardian spec not recognizing any currently equipped weapon. I haven’t been able to get it to a state where the weapon recommendations are using anything other than two handed weapons.

We’re working on the bug list, going through them. We extended everyone’s free trial until Tuesday while we fix things.

Druids always present a bit of a problem in Classic and TBC. Our site is built around the idea of having explicit specs, which weren’t added until later expansions.

When you import your character, we detect your spec based on your talents – unfortunately with TBC it is tough to determine if someone is importing as “Feral” (cat) or “Guardian” (bear). We can try to use some of your equipped gear to make a better guess.

In your case, the Guardian setup’s gear is never being updated because we’re never detecting you as guardian, and your talents don’t match what you have chosen on that setup.

We’ll try to make the auto detection smarter, but you can always fall back on this talent behavior to get a setup to update.

If you could make a new thread with a snapshot of your case, we can take a closer look and see what’s up. Instructions on how to do that here: